It wasn’t the first time Dexter Morgan had to get himself out of a sticky situation, and surely, it won’t be the last.

In this Sunday’s episode of Dexter: New Blood, one of TV’s most awkward father/son reunions was interrupted when police enforcement (and the whole dang town of Iron Lake) descended upon Dexter’s property to search for the recently missing Matt Caldwell. Little do they know, Dexter had already hacked up and hidden Matt’s body by the end of last week’s premiere. With the bloody remains still lurking about, Dexter had to scramble to fully hide his dastardly deed, while his old world (Harrison) and his new one (Angela) headed straight for a collision. Read on for a full recap of “Storm of F–k.”

“So, you’re not dead,” Harrison says to his formerly estranged father. Unsurprisingly, he’s not happy about being deceived and abandoned (who can blame him?), and as the two catch up, the boy drops some devastating news on Dexter: Hannah (formerly played by Yvonne Strahovski) died from pancreatic cancer three years ago. Since then, Harrison’s been in and out of foster homes until he found a photo of Dex on Instagram, and decided to track him down.

Dead Deb — aka Dexter’s inner monologue — is not happy that Harrison’s here. Dexter tells her his son will prevent him from killing again, to which she replies, “If by some goddamn miracle you don’t end up killing him, you sure as s–t will f–k him up!” From the looks of it, this is one scare tactic from his conscience he’s planning to ignore.

The next morning, Dexter finds evidence of his sloppy work from the night before: the blood in the snow. But as he starts to shovel over the red patches, a line of police cars abruptly pulls up to his property. Angela tells him that Matt disappeared in the woods near his home, and she’s hoping they could set up a base for the search in Dexter’s yard. Dexter’s happy to oblige, while he secretly sweats bullets. Their conversation is interrupted by Harrison, who walks outside and introduces himself to Dexter’s lady-friend as “Jim’s son.” “Add that to the list of things I need to clean up,” Dexter tells himself. 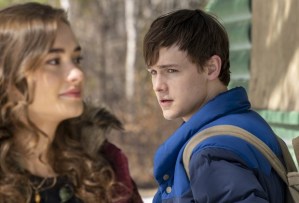 As swarms of police and citizens flutter about, Dexter worries that if he missed some blood splotches, he may have missed something else important. Dexter and Harrison head out and “find” the dead buck, and while Harrison heads back to base to alert Angela, Dexter hunts for the source of the blood trail. To help control the narrative, he plants one of Matt’s gloves deeper into the woods near a main road.

When he gets back, a group of Seneca natives stands over the dead deer. Angela tries to dismiss suspicions tying Matt to the animal. (If you’ll recall, it’s illegal to poach on Seneca land). One of the men comments on how amazing it is that the entire town turns up for Caldwell, but when “one of our girls” goes missing, no one seems to care. “After Iris, you of all people should know,” he tells her.

Just as Dexter wanted, the glove is indeed found, and Fred Jr. confirms that Matt had similar gloves on when he shopped at the fish and game store. This clearly isn’t Dexter’s first rodeo.

Debra reminds Dexter that he’s a serial killer who can’t wait to kill again, and that he loves that he’s going to get away with murder. “You are going to fail this boy a thousand different ways because of it!” she taunts, causing Dexter to explode in a fit of rage.

With help from a local butcher, Angela finds the slug that killed the deer, which seems to match the bullets Dexter sold Matt. 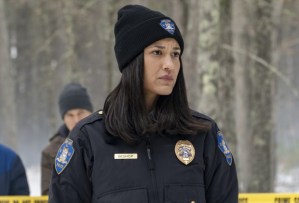 Meanwhile, Lily (the girl Angela helped in the premiere) takes refuge in a cabin, only someone has bugged the joint and is watching her every move. She eventually finds the camera that’s been recording her, and written on the ceiling underneath the red light are three words: “You’re already dead.”

Back at Dexter’s, Angela announces they’re shutting down the search. She believes Matt shot the deer and fled the scene after realizing his wrongdoing. When Audrey gets back, Angela tries to ground her and the girl loses her cool. “How many times do I have to tell you: I’m. Not. Iris!” Sounds like Angela may have a secret or two of her own.

That night, Harrison reveals a letter in his possession that Dexter wrote to Hannah: “Reach out to me if Harrison shows any dark tendencies.” The boy wants answers. Why did Dexter fake his own death to hide from him? Dexter explains that it wasn’t Harrison he was afraid of; he was afraid of himself. He was scared he’d pass his demons on to his son. He was in a dark place when he lost Rita and Deb, he explains, and he got lost in all that death. Dexter tells him he deeply regrets leaving, but he never thought Harrison would wind up alone. “But maybe I can be there for you now,” he says. And with that, Harrison agrees to stay, at least for a while.

Matt’s dad Kurt arrives to the scene just as the cops are packing up, but he doesn’t buy the story Angela pitches him. He begs the search party not to give up, and they agree to continue searching through the night.

As the episode wraps, we see that Dexter has stashed Matt’s dismembered body and gun in the soil underneath the bonfire outside.

Who is this Iris girl, and how long will Dexter be able to hide the body? Drop your thoughts in a comment below.