In case you were wondering how long it would take before Dexter Morgan killed again, the answer is: not long at all!

In the premiere of Dexter: New Blood, the titular serial killer’s primal urges caused him to relapse after he crossed paths with a reckless and entitled d-bag who’d been responsible for a few deaths of his own. Though it had been a whopping 10 years since Dexter’s last kill, a series of events brought the former Miami-based blood spatter analyst past the point of no return. And, by the end of the hour, blood was viciously shed, opening up the floodgates to another exciting chapter in Dexter’s life, whether he wanted it or not.

So how do his deceased sister Debra and his now-grown son, Harrison, factor into all this mess? Read on for a recap of “Cold Snap” (and be sure to read what Michael C. Hall had to say about the episode here).

As we reacquaint ourselves with Dexter, he’s living in an upstate N.Y. town called Iron Lake. He works as a sales associate at a fish and game store, and even has a girlfriend named Angela, who just so happens to be the chief of police. And while he hasn’t killed in about a decade, his trusty conscience (which takes the form of Jennifer Carpenter’s late Deb) helps him remain abstinent. (How great is it to see Michael C. Hall and Jennifer Carpenter share the screen again?)

Of course, Dexter is well-liked in town, charming the local pastor and getting hammy with the local teens. Plus, his job selling rifles and other weaponry appears to keep him content — that is, until a guy named Matt comes in to buy a knife and a “big ass gun” and disrupts Dexter’s quiet existence. The rich and spoiled Matt thinks the law doesn’t apply to him, and balks at the government-enforced waiting period necessary to buy a deadly firearm. Matt’s background check does indeed raise a red flag or two. He was in a boat crash which killed five people, and his record is a wee bit spotty.

Dexter appears triggered, and we see the daily struggle he faces to continue his new normal. “Stick to your routine,” Debra assures him. 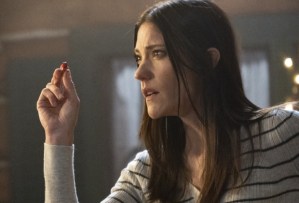 Matt’s background check finally clears, and Dexter is tasked with delivering the weapon, which he does begrudgingly. When he arrives, Matt’s buddy Bill reveals with the loosest (drunkest?) of lips that he covered for Matt at the post-accident trial so his friend could walk free. Matt was not only driving the boat that night, but playing chicken. And when the other boat yielded, Matt purposely rammed into it. Matt’s dad now pays Bill $2K a week for taking the fall, but the scars on Bill’s face are a constant reminder that his friend was unworthy of the favor. When Dexter finally puts the weapon in Matt’s hands, he daydreams of knocking him out with the butt of the gun.

Later that evening, an intruder breaks in to his home. It’s Harrison, Dexter’s son. Dex instinctively wants to hug the boy, but Deb steps in. “You can’t. Everyone close to you dies!” she warns. He tells Harrison that he must be mistaken, but the kid doesn’t buy it. Deb chimes in again: “Doakes, LaGuerta, Rita… me?” In a panic, Dexter gives Harrison bus money and sends him on his way, a decision he is clearly torn up about.

The next day Dexter comes nose-to-nose with a beautiful white buck in the woods near his home until BANG! Matt shoots it dead, dangerously firing his weapon with Dexter in close proximity. Matt rushes over to celebrate his shot, but this time, the butt stroke isn’t a daydream. Dexter knocks Matt right the hell out.

Luckily for him, the killer has plenty of tarps and heavy-duty plastic on hand. Matt wakes up in a newly constructed kill room, naked and strapped to a table. Dexter slices Matt’s cheek with glass and saves a blood sample in between two panes. He makes Matt fess up to his crime, and as the man-child blubbers on about his dead mom and bad childhood, Dexter appears moved by his relatable demons. But then Matt erupts into a fit of rage, threatening that his affluent pops will find and destroy him. So Dexter shuts him up by planting a large hunting knife into his chest. He relishes the fresh kill, as relief washes throughout his body. Shortly after, he grabs a reciprocating saw and gets to it.

Dexter then goes to the bus stop to find Harrison, admitting to his son that he is, in fact, his father. “Come home,” he tells him. “Please.” In his final voiceover, Dexter vows to take care of the teen by doing exactly what Harry did for him. As the father and son enter Dexter’s humble abode, the camera pans up, pinpointing patches of blood that stain the snow crimson.

What did you think of Dexter‘s big return? Grade the premiere below, then sound off in the Comments.