Were Beth tasked with taking a wrecking ball to an enemy — trashing a career, say, or bankrupting a company — she could do that blindfolded with one hand tied behind her back. Maybe two. As Reilly puts it, “she knows how to destroy, but does she know how to nurture, how to take care of something?”

Prior to Sunday’s episode of the Paramount Network’s never-ending thrill ride (8/7c), viewers have marveled at the spectacle of Beth giving it the ol’ college try, sweetly manipulating tough-guy fiancé Rip into taking a shine to Carter and going so far as to perfect her recipe for Hamburger Helper. (The trick? Use hamburger, not tuna.) “Suddenly,” observes Reilly, “we’re seeing her nurture and cook and sort of try out this aspect of herself that I think is really beautiful.

“There’s something about Carter that pushes her buttons in a way that nothing ever has,” she adds. “I don’t know that she feels she’s actually capable of [parenting him] or if she thinks she’d be any good at it. She’s not a Disney character.” 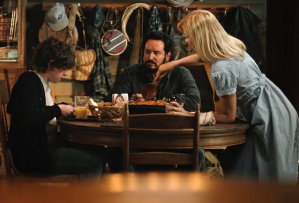 That may well be the understatement of the decade. Beth is a fantastically foul-mouthed, hard-drinking volcano in cowgirl boots. She is, however, a volcano who loves as hard as she fights. So taking Carter under her wing “is probably one of the most challenging things that Beth is going to encounter in her life,” Reilly suggests. If he becomes to her the son that she and Rip can’t have, “I have no doubt that she would protect that the way that she protects her father.

“And there’s a part of me,” she continues, “that hopes for her that she gets her own family to look after.”

Want scoop on Yellowstone, or for any other show? Email InsideLine@tvline.com and your question may be answered via Matt’s Inside Line.