As The Challenge: All Stars Season 2 premiere (now streaming on Paramount+) kicks off, we’re treated to some tasty soundbites as a female player shouts “Nobody likes you!” while another assures us he’s “ready to take f–kin’ heads!” If there were any doubts as to how much more dramatic and cutthroat this season would be, consider ’em squashed (or just ask Katie Cooley).

As the players get chauffeured in via boat, we’re reintroduced to some of the “new” OGs who are back to compete for their share of $500,000. Some, like Derrick Kosinski, Darrell Taylor and Jonna Mannion, are seeking redemption following a disappointing Season 1 loss. Others are old school Real World and Road Rules peeps we haven’t seen since the early Challenge days, like Tina Bridges (née Barta), who’s best known for “getting angry, being mean and my one liners.” (Uh, and how about that time she clocked Beth Stolarczyk in the noggin? Roll the footage!) Also joining Season 2 to make their All Stars debuts are Brad Fiorenza, Jodi Weatherton, Cohutta Grindstaff and more, but you can peruse our gallery here to check out the entire cast list.

As the cast settles in and gets their drink on, host TJ Lavin pops in with a few ominous warnings. He assures everyone that they can “never outrun their past,” and that they need to be ready for anything. The first challenge is “no joke,” he says, before disappearing into the night.

Ahead of the first Challenge, Derrick tells Jodi (his fellow Road Rules: X-Treme partner) that he wants to run the entire show with her, though she seems slightly concerned that she doesn’t have any super-tight friends with her besides D. Other small cliques soon reveal themselves. Janelle and Darrell are both from the Bay area, and nobody knows how close they are, which could work to their advantage. Jonna talks to Sophia about being joined by two of her Real World: Cancun roomies, and as Jasmine tells us via interview, she knows Jonna will have her back.

CHALLENGE DAY | As the cast preps for the daily, Derrick recalls sending Nehemiah into elimination last season; Nehemiah then tells us that Derrick is intimidated by him. Clearly there’s zero trust between these two. Will that come into play this season? (Let’s hope so!)

For their first competition, players must work in pairs, leaping from a Zodiac boat onto a larger vessel. After grabbing a skull and crossing a wobbly balance beam that connects to a larger barge, they must take a leap of faith and dunk the skull into a basket hanging over the water. The team with the fastest time wins safety from elimination and will have all of the power. 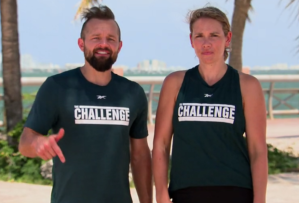 Only one player falls into the water, thus disqualifying her duo from the challenge. So unfortunately for them, Ayanna and Nehemiah are going straight into elimination. Every other team crawls across the beam on their chests or butts, and when it comes time to announce the results, TJ takes them all to task. “How bad could you possibly play?” he asks. “Not one of you went across that balance beam like a balance beam. Pitiful!”

After doling out his licks, TJ announces that every elimination is going to be a double. That means one male and one female will be going home every week. He announces the top two teams (AKA “who did the least terrible”) were Tina and Steve, and Derrick and Jodi, but the latter duo takes the cake.

Derrick and Jodi must now nominate two men and two women to potentially go into the Arena. The house will then vote and select one man and one woman out of those nominations to face Ayanna and Nehemiah in the sand. Having the power couple declare the nominations is a great twist to introduce to the deliberation process, one that will surely fuel the drama and paranoia. Let the games begin!

The episode ends with a big ol’ cliffhanger, so we’ll have to wait until next week to see who becomes the season’s first casualties.

Excited for another round of All Stars, and who are you most excited to see back? Grade the episode below, then hit the Comments!