Former Challenge champ Katie Cooley may not have walked away victorious last season, but that’s not stopping her from taking another stab at securing the bag.

In Season 2 of The Challenge: All Stars (premiering Thursday, Nov. 11, on Paramount+), Cooley returns alongside 23 other Real World and Road Rules veterans, all of whom vie to prove they’ve still got what it takes. Once again hosted by franchise staple TJ Lavin, the 10-episode competition series filmed in Cancún, Mexico throughout August. And while Season 1 victor Yes Duffy sits this one out, this second round reunites Challenge legends like Derrick Kosinski, Brad Fiorenza, Tina Barta, Cooley and more as they battle it out in a showdown for bragging rights, and of course, 500 large. (View the full cast list here.)

Here, Cooley talks to TVLine about Season 2’s more difficult deliberations, reuniting with her Road Rules castmates and where her friendship (or lack thereof) with Trishelle Cannatella currently stands.

TVLINE | The social politics of Season 1 were relatively tame. Did deliberations stay in the spirit of fair competition, or did things get a little messier this time around?
KATIE COOLEY | Unfortunately, it was not as PC as the first season. It was definitely more cutthroat because of the way the game was designed. I thought, “Oh, no one wants to be the big jerk because they have kids. They don’t want their kids to see them being an a–hole, or their kids’ teacher, their boss, their spouse or their in-laws.” But nope. I was wrong. No one cared. [Laughs]

TVLINE | In terms of difficulty, how do you compare All Stars to the other shows you’ve done?
I think it’s right on par. I thought it would be much simpler, but it’s not. It’s as extreme as it used to be. I really did hope it was going to be a little tamer. Again, I was surprised! Like, why can’t this just be cool and chill?

TVLINE | You’re joined this time by a couple of your Road Rules: The Quest cast members. What it was like to see Steve [Meinke] and Sophia [Pasquis] again, and have you kept in touch with any of the other Road Rulers from your season?
I’ve always kept in touch with Steve since our original season. He’s actually come to my house and had dinner with my husband and me, so we’ve definitely kept in touch. Sophia was great to see. She’s such a good person and has such a good energy about her. She’s just really fun to be around. I was really excited to see her, and I’ve kept in touch with both of them since filming. I talk to Adam [Larson], too, he was at my house over the summer. I don’t keep in touch with Blair [Herter] or Ellen [Cho].

TVLINE | Which cast members were you most surprised to see out there for Season 2?
I wasn’t really surprised to see anybody, because there’s gossip before the shows begin on who might be going. I was excited to see a lot of people, like Tina, I hadn’t seen her in a long time. Ryan [Kehoe] is always fun. Kendal [Darnell], of course. I love being on any show with Darrell [Taylor] because he’s so funny. There wasn’t anybody there that I had any animosity with.

TVLINE | Was there anyone in the cast that you didn’t want to see there?
Not really. I tried to give everyone the benefit of the doubt. Maybe if they were a scumbag a decade ago, they grew up, and for the most part it seems they did. Or if they were sweet as pie, wooo, they changed a bit! I think people will be very surprised. 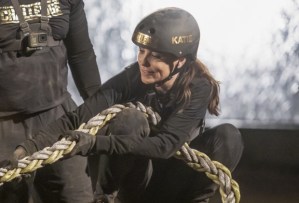 TVLINE | Does it ever annoy you that the show has made a meal out of re-playing your horrific falls into water?
I’m like, “OK, they get it. They get it.” I don’t get embarrassed, it’s just like… enough! Everyone in my family will be watching and they’re like, “Oh, there it is! They didn’t forget!” and I’m like, “Oh, yay.” [Laughs]

TVLINE | Are the heights-over-water challenges your biggest fear on the show? What else in your Challenge history compares?
I would rather be buried. I’d be fine going underground, I can hold my breath… there are lots of things I can do. Anything that’s too high up, I feel like I’m not in control, and it scares me. Anything else, I’d be fine with. It’s just the heights stuff. We’ll be in the Challenge bus and I’d I see a crane, and all of a sudden I’m like, “Oh my god, I have to pee.” I always get nervous, my anxiety would kick in, I’d start sweating… and I’m like, “No, no, no.”

TVLINE | Are there any cast members you’d like to see make their return in the All Stars series that we haven’t seen for a while?
It’d be fun to have Mike [“The Miz” Mizanin] back. I know he’s on Dancing With the Stars, and is this big wrestling guy now, but he was fun on the shows back in the day. Timmy [Beggy] would be fun to have back. If the timing works for people and they keep the shows short, they’ll get who they want. [The seasons] just can’t be long, because unless you’re a loser and you don’t have a life, you can’t leave for eight weeks. With a kid and a career, unless you’re a bartender, I don’t know how you could make it happen. I can’t justify leaving for nine weeks, so if it gets longer than three weeks, that’s my cap. 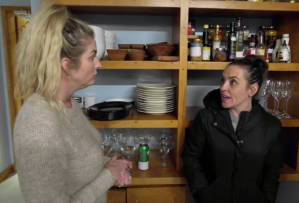 TVLINE | Have you talked to Trishelle since her Season 1 exit? Is that a friendship you think could be mended?
I think it ran its course. We haven’t kept in touch. We live busy lives. No ill will towards her. I wish her nothing but the best. I’m surprised people are so interested in that! That amazes me. Everybody’s asked about it. I’m like, “Wow, people really give a s–t?” [Laughs]

TVLINE | If All Stars keeps asking, will you keep picking up that call?
Right now, I’m going to say this is it. Maybe if COVID stops and they can quit the quarantine thing, but I just can’t leave for that long. I know it’s hard for them to film a show in such a short amount of time. [If they] just condense it all, they’ll get the people they want. But even on Season 2, I was getting anxious. I can’t be away that long from my family.