As R&B superstar Aaliyah once sang — and The Challenge: All Stars just proved — age ain’t nothing but a number.

The debut season of the franchise’s OG extravaganza concluded Thursday with the remaining 30- and 40-something players battling physical exhaustion, lack of sleep, carolina reapers and whatever the heck was on that gross plate all in hope of securing that half-a-mill bag. Last week’s episode saw Derrick and Jisela eliminated after their canoe leg went horribly wrong, leaving Mark, Darrell, Eric, Yes, Alton, Aneesa, Jonna, Jemmye, Ruthie and KellyAnne still in the running.

So what horrors still awaited the group and who won the very first season of All Stars? Here’s a recap.

After Darrell calls for a medic, KellyAnne convinces him to suck it up (“It’s just like period cramps, keep it going!”) as all of the teams hike their way to the next checkpoint. But the reapers they chowed down are taking a toll on everyone, especially Jemmye. With everyone struggling, KellyAnne and Darrell out-haul the competition and bank five points a piece for this leg, while Yes and Aneesa take second.

CHECKPOINT #5 | The duos swap partners, and Jemmye is not pleased about working with Easy. But with her stomach still flip-flopping from the peppers, her day is about to get a whole lot worse: It’s another eating challenge. The meat on the plate is a gnarly mix of roasted animal parts, and while the players have no idea what they’re stickin’ in their mouths, this “Patagonian picnic” looks gross AF. Ears, tongues, snouts… cue the vomiting montage! KellyAnne has a rough go of it, while Jemmye looks like she’s dying. Alton decides to go all Hannibal Lecter and treat the plate of dead things like it’s a majestic bounty of delicacies. That’s one way to look at it, I guess! 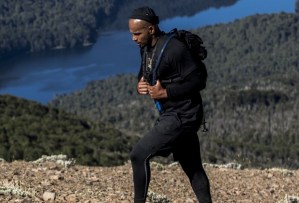 Jemmye considers quitting, but per the rules, if she bows out, she takes her partner out with her. She hangs in though, as KellyAnne and Mark finish first, with Jonna and Alton right behind.

Day 1 comes to an end, but their night isn’t going to be that restful. One player must stand on a small platform to hold up a bed on a teeter-totter, while the other player catches ZZZs. Jem calls it the “worst sleepover you can imagine,” while KellyAnne says it’s “torture.”

DAY 2 | Yes, Darrell, KellyAnne and Jonna lead the pack in points going into the second day, as TJ pulls up on a horse donned in medieval-looking Argentinian garb. For the final bit, the players must race to the top of the highest peak, every man and woman for him- and herself. And the points for this last stretch are doubled.

The horn blows, and the race is on! Darrell goes on a tear, but Yes knows it’s a marathon and not a sprint. He takes his time to remove some excess clothing, and then moseys onward. He passes Darrell and gains a significant lead, spitting a wee bit of friendly trash-talk along the way.

Yes is the first to the top, saying, “I got more in the tank, man. I’ll take on any of them other little punks from them other shows, too.” (Speaking of, why is the rumored Challenge 37 cast filled with rookies we don’t know from international shows we haven’t seen when we can have people like Yes, Nehemiah, Ruthie and Derrick back? Sigh.) Darrell comes in second, while the Godfather takes third. 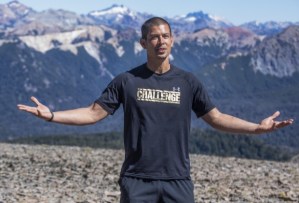 But who wins the big money? It’s time to break down the points. In third place is KellyAnne and Jonna, tied with 24 points each. In second with 29 points is Darrell. And in first place with 31 total points (and half a million dollars!) is: Road Rules: Semester at Sea vet Yes!

Did the right person win, and how did you like this All Stars installment? Grade the episode and season below, then drop some comments!