We come to bury Law & Order: Organized Crime‘s Eddie Ashes, not to praise him… but you’ve gotta admit: The first part of Season 2, with Stabler undercover as the ex-con arsonist, was pretty fun.

Thursday’s OC marked the end of the Albanian-drug-ring story, with Kosta, Albi and Flutura in custody and Reggie’s mother, Agnes, facing accessory to murder charges for her role in the court reporter’s death. As she was wheeled into the courtroom for her arraignment, a livid Agnes tried to get her revenge on Stabler by shooting at him. She missed, but chaos broke out. Eventually, the whole thing was over and Bell told her detective to go home and shave his beard, because his time as Eddie “Ashes” Wagner was done.

And now that Stabler’s vacation-of-a-sort from his real life is over, showrunner Ilene Chaiken says, there’s plenty that will demand his attention. First up: Season 1 villain Richard Wheatley (played by Dylan McDermott), whose trial approaches. Read on for Chaiken’s thoughts on what’s ahead and her report from a recent convocation regarding the romantic (?) future of Chris Meloni’s Stabler and Mariska Hargitay’s Law & Order: SVU captain, Benson. 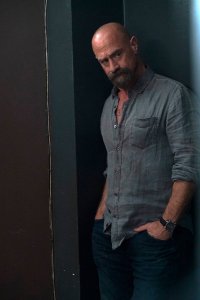 TVLINE | What will Stabler’s re-entry into normal life be like, post-Eddie Ashes?
Well, firstly, his reentry of course doesn’t come at the end of these eight episodes. It begins in the next episodes, once that case is over. And it’s going to be fraught, as it’s bound to be, given what Stabler has been through, given that he’s lived in a violent and borderless world and also that he’s suppressed his own identity for so long. We all acknowledge that he was hiding a bit and you can’t really hide from yourself, so he’s going to have to face himself.

TVLINE | Was there ever any discussion about Chris keeping the beard, or was that always going to go in the end?
[Laughs] Well, let’s say it’s always been our intention, as the beard pretty much symbolized his undercover persona and his hiding from himself. But that doesn’t mean there wasn’t a discussion about it. [Laughs] 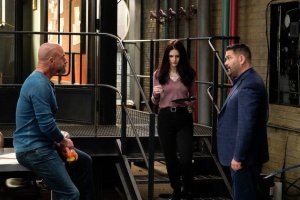 TVLINE | Brewster has been promoted. Does that open the door for Guillermo Diaz to become a more permanent part of the cast?
We certainly hope so. And it also opens the door for a new and even more challenging relationship with Stabler and Bell, now that he’s officially their boss. Their former boss was a somewhat crotchety, but actually warm, individual whom they both trusted. And it remains to be seen whether they can trust Brewster.

TVLINE | At the start of the season, you told me that the middle block of episodes would be the Richard Wheatley show. Is he back in this next episode?
Yes. Wheatley is back in Episode 9 and will be with us for a good, intense run.

TVLINE | And Angela as well?
Yes.

TVLINE | We haven’t seen Richard in a while. Has he been stewing in his absence?
Well, I don’t want to tell you too much because that would just be spoilers and giveaways. But Wheatley remains confident, manipulative and strategic.

TVLINE | After the incident with Eli and the pills, which Liv was around for, things seemed to have smoothed over a bit. But knowing how people are, those kind of things don’t generally resolve that easily.
No.

TVLINE | What can you tell us about the relationship between Elliot and Eli as we move on?
Eli does have more story that continues to address that subject, and Stabler coming home will be significant, challenging. He will try to be a better father, to take responsibility. He’s full of self-recrimination, and it’s not all undeserved, I would say.

TVLINE | Are all the Stablers going to be in that apartment together? Is Bernie still part of their small family unit?
Well, she certainly is for the moment. They’re going to grapple with it and figure out what makes sense. And if after all this time and a lot of water under the bridge, Bernie can actually become a part of Elliot’s life and family as she never was before. 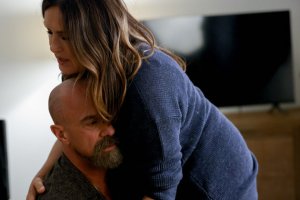 TVLINE | The other day, SVU showrunner Warren Leight tweeted about a dinner he had with you, Mariska Hargitay, Chris Meloni and some people from Wolf Entertainment during which you all discussed the future of Stabler and Benson.
[Laughs] I was shocked and delighted that Warren invited the world into our conversation. I mean, we had a conversation amongst ourselves that I won’t share with you, because I think it’s very personal. It was just, you know, ‘What do you imagine? What do you feel? What do you want?’ And it wasn’t just us asking Mariska and Chris, it was all of us talking and imagining these two people and just trying to dig deep and be real about it. And I love hearing from the fans and I’m not going to pretend that I didn’t have a little look to see how they responded to Warren. [Laughs]

TVLINE | Within that very collegial, familial discussion, did everyone seem to be on the same page? Were there kind of different points of view on where it should go?
It wasn’t as if we had, you know, extremes of difference. I mean, we all agree in principle, and we all have different thoughts about how it might treated as story. And that’s the fun of it and the fun of following out all of these ideas and seeing which ones feel the most worthy.