Inspired by what they call the “alternative numbers” used to tout the performance of streaming shows, CBS — with tongue planted a bit firmly in cheek — has detailed the billions upon billions of minutes viewed of its broadcast shows.

For the uninitiated, some background: Nielsen, for one, issues a weekly “U.S. streaming ranking” that denotes the Top 10 in assorted categories, as measured by total minutes of a program viewed within a week-long period. Netflix, meanwhile, is in the midst of transitioning from touting what I will generously call “accounts reached” (i.e. those who sampled at least two minutes of any series) over the first 28 days of release, to tallying total hours viewed across all member accounts.

Jumping onto this “billions” bandwagon, CBS reports that as a network this fall, its programs across all day parts have amassed 166 billion minutes of liner viewing (commercial time not included), placing it ahead of NBC, ABC and Fox. 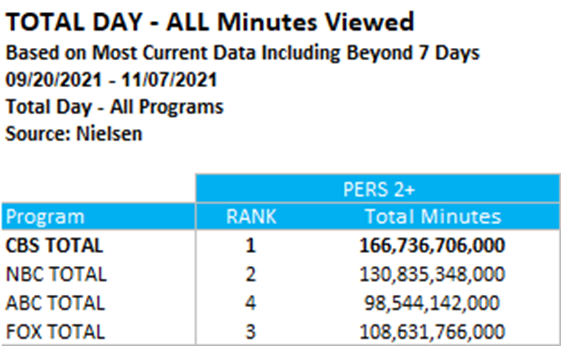 A few of the other highlights shared by CBS:

♦ The FBI franchise has been viewed for more than 10 billion minutes over the first seven weeks of this TV season. (FBI leads the way with 3.64 billion minutes, followed by Most Wanted‘s 3.26 billion and International‘s 3.10 billion.)

♦ NFL on CBS has amassed 45 billion minutes this fall, up 2 percent year over year.

♦ The Price Is Right leads all daytime shows with 8.6 billion minutes viewed, while The Young and the Restless is the o. 1 daytime drama with 7.8 billion minutes.

Perhaps most fun of all (though admittedly a bit more removed from that which it is spoofing), CBS threw in this tidbit: “Since it premiered on CBS in 2003, viewers have watched over 3.8 trillion minutes of NCIS and all its spinoffs across broadcast, cable, streaming and syndication.”