As if daylight saving time didn’t already have us out of sorts, here comes The Resident with a few more jarring changes.

As you’ll recall from Episode 5 of the Fox drama’s fifth season — which aired three weeks ago, before the show’s World Series-induced hiatus — The Resident has leapt forward by three years, sparing our tear ducts from the worst of Conrad’s grief over Nic. But where has this time jump left the Chastain staff? And which character’s new circumstances might be eliciting “very strong feelings from people,” as co-showrunner Peter Elkoff predicted last month?

Before you give us your thoughts on Episode 6, let’s recap each doc’s new life:

CONRAD | In order to spend more time with Gigi — and perhaps because the halls of Chastain are too triggering for him after Nic’s death — Conrad now works as a concierge doctor at a private practice. He’s got a much more regular schedule these days; he can even swing having dinner with his daughter at a normal time. But during Tuesday’s episode, he brings in a patient to Chastain who’s been diagnosed with metastatic lung cancer and can’t afford any more medical debt. When the patient’s stay at Chastain turns both volatile (he holds two pharmacists hostage in order to get his hands on a promising chemo drug) and medically puzzling (he doesn’t have cancer, after all; it’s tuberculosis), it’s clear Conrad is thrilled by those challenges that he no longer gets at his current practice, and he and Devon quickly fall back into their unique problem-solving rhythm. 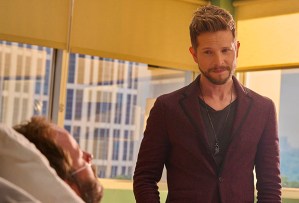 That night, Devon tells Conrad that he understands why Conrad left the hospital, but he can’t help feeling like Conrad still belongs there. “It wasn’t my plan to leave. But Gigi’s my everything,” Conrad responds. “She’s waiting for our dinner. I can make it. She comes first now.” And after giving Devon a wistful smile on his way out the door, it seems like that’s the last time Conrad will be at Chastain for a while… until that evening, during his adorable dinner date with Gigi, when she asks how Conrad’s day was. “It was the best day I’ve had in a long time,” he tells her, and she smiles.

AJ | In addition to sleeping with Leela’s sister, Padma (more on her in a minute), AJ is something of a celebrity now after publishing his book, Heart Sounds. He’s on the covers of magazines, he’s on CNN… and now, he wants to be Chastain’s next chief of surgery after the current chief announces his retirement. The problem? Bell wants the job, too. Throughout the hour, AJ and Bell try to one-up each other in the operating room, but it’s all for naught: Billie gets offered the chief of surgery position after an impressively handled procedure on an MMA fighter’s spine, and Billie quickly accepts.

As Kit — still Chastain’s CEO, by the way — reminds AJ, he’s much too busy with media appearances these days to be chief, and Bell already had the job and quit due to all the maddening bureaucracy. The men’s egos are deflated a bit, sure, but they take the rejections in stride. Oh, and have I mentioned? KIT AND BELL ARE FULLY DATING AND MAYBE ALSO LIVING TOGETHER YAYYYY

DEVON AND LEELA | This pair is still dating and also living together — though, as Leela’s sister bluntly points out, Leela and Devon hardly ever spend time together outside of work, especially now that Devon’s the attending physician at Chastain. (Yay, Devon!) Leela is defensive at first, particularly since Padma is a little too free of a spirit and hasn’t put roots down anywhere yet. But later, she heeds Padma’s advice to take some time for herself, and she and Devon have a verrrry steamy shower together.

OK, your turn! How did you feel about The Resident‘s first post-time jump episode? Grade it below, then hit the comments!