The following post contains major spoilers for Season 5, Episode 5 of The Resident. Proceed with caution!

Ah, kids — they grow up so fast, don’t they? Especially when there’s a sudden, several-year time jump involved. 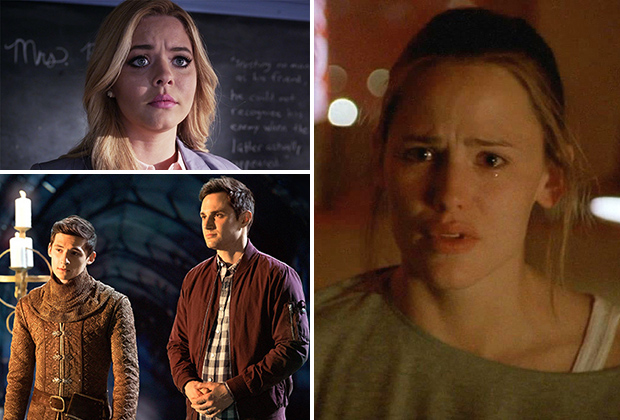 Tuesday’s Halloween-themed episode of The Resident ended with the show taking a significant leap forward — to be specific, “three years and change,” as co-showrunner Peter Elkoff confirms to TVLine. As Conrad swung open the door to Gigi’s nursery at the end of the hour, it instead opened to reveal Gigi as a toddler, dressed up as an astronaut for Halloween and preparing to go trick-or-treating with her dad.

Conrad’s sweet moment with Toddler Gigi was the only glimpse of the time jump that we got before the episode concluded, leaving questions about the other Chastain docs’ current statuses. Below, Elkoff teases some of the personal and professional changes that will be revealed in upcoming episodes, and sheds light on how the time jump came to fruition. Scroll down to see the show’s new post-time jump key art, then read on for Elkoff’s insights.

TVLINE | When we spoke after Episode 3, you alluded to the challenges of deciding when to move past Nic’s death. Walk me through how you settled on this time jump.
The character of Conrad — any man who loses the love of his life and the mother of his nine-month-old baby — that’s a long recovery. That kind of grief is not an instantaneous recovery. You don’t put that past you. We felt like having to do that, in real emotional time, would be dark. We didn’t want to have Conrad grief-stricken for an entire season of television, you know? We did two episodes of how Conrad has dealt with those early stages of grief, and we decided, let’s put him past it. Let’s put him in a place where she’s still in everybody’s hearts and minds, but that he’s able to be a whole, happy person in pursuit of his life and the raising of his daughter and figuring out what matters.

TVLINE | To that end, was there any debate about how long to make the time jump? Did other options feel like too big a leap?
You know, a lot of it has to do with what people look like, too. You can’t just jump six or seven years and not change the way people look, because people get older. You also then have way too much history to catch the audience up on. Three years felt like, OK, everybody can look pretty much the same, slightly different hairstyle, different facial hair, perhaps. But nobody’s going to look drastically different, and it’s also a period of time that we can speak to, in passing, in terms of where they were for those three years and what happened. The changes don’t have to be so enormous that the audience would just be like, “What?!”

TVLINE | Do you plan to incorporate any flashbacks to those three years in between?
We haven’t landed on that. To be perfectly honest, we really have not figured out yet if there are stories that need to be told in flashbacks, or if we’re just going to keep moving forward. But we refer [to that missed time] in conversations that people have. You know, “Hey, you must have been doing this, because look at you now.” I know that’s a terribly bland thing to say, but there are a few characters who have a different relationship when we get a couple episodes past the time jump, and you’re wondering, “Wait, how did those feelings change?” And we go, “Oh, you were in therapy.” [Laughs] You learn little tidbits about what people did, but we tried to do it organically and in the way people would actually talk about things.

TVLINE | What challenges have you encountered while writing the time jump, in terms of how much to change? You presumably weren’t looking to break up every couple or change everyone’s jobs at the hospital.
You want to change it so the audience feels that it’s exciting. It’s the fifth year of a show, and it’s always good to shake things up four, five, six years into a show with a very loyal audience and give them something new — but not so much that you knock them off the train and they’re like, “Whoa! I don’t recognize this. Raptor’s a professional baseball player? What?” That was exactly the challenge. [In Episode 5,] there’s really very little information about the changes. It’s just in that little ending, which is terrific, but it doesn’t tell you anything. [The changes] come in Episode 6, and we wanted to do that little piece at the end of Episode 5 to give people a sense of, “Oh, man, I can’t wait to see what’s happening three years from now.” 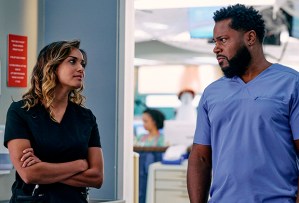 There are some new relationships that are heating along. Kit and Bell, as you’ve probably figured out, are a couple, which I think is something the audience will really appreciate. Everybody loves them so much together, even just as pals. Roles have changed at the hospital. One of our bigger characters is not doing what he had previously been doing. There are some big changes that are unexpected. When we get to Episode 6, a new character shows up who I think will really startle the audience in an excellent way. In Episode 7, too, we have a new character coming on who’s going to really turn the hospital upside down in an excellent way. We tried to really stick to that fine line of giving our characters new elements to their lives, while maintaining their identity.

TVLINE | Which of the new developments do you think viewers will be particularly surprised by?
I think people will be very surprised, when they watch Episode 6, to learn… [pauses] And I don’t want to tell you which character it is, but there’s one character whose circumstances will definitely surprise the audience. It will elicit very strong feelings from people.

The Resident fans, how are you feeling about these changes? Give us all of your thoughts in a comment below!