Supergirl’s series finale delivered the action, the emotion and a satisfying ending that saw both Lena and Lex Luthor get exactly what they deserved.

Lena, who struggled with the high expectations put on her as a member of the Luthor family, found the inner peace she’d been searching for after a heartfelt conversation with her adoptive mother Lillian. Lillian, who was dying, used her final moments to urge Lena to live her own life, finally freeing her of a lifelong burden and empowering the former CEO of L-Corp to move forward.

Lena’s final moments in the series were filled with an abundance of joy: She used her magic to help save the world, started her own foundation, was declared the godmother of Alex and Kelly’s daughter Esme and closed out the show hanging out with her friends. (Read our full recap here.)

Her brother Lex, meanwhile, suffered a far worse fate. In a final battle with the Super Friends, Lex opened a portal to the Phantom Zone in the hopes of banishing them for good. However, his plan backfired, and the Phantoms took him and Nxyly away instead — drawn to Lex’s innate fear disguised as hubris. 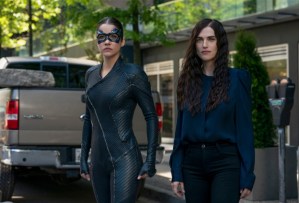 Katie McGrath, who plays Lena, and Jon Cryer, who plays Lex, opened up about their characters’ fates in the series, which you can check out in the interviews below.

McGrath on what she remembers from filming Lena’s emotional conversation with Kara at Kelly and Alex’s wedding: “It’s the last week of filming, and it’s the last big scene for my character, but then also, it’s the last big scene for Kate. In the moment, it’s a big deal for Lena, but it’s also a big deal for me because as much they’re putting the final, full stop on the end of Supergirl, I’m doing the same thing myself. It’s been five years. We’ve lived in each other’s pockets — the cast, the crew, the producers, the writers.

I think back to my first day, where I was only ever hired to do three episodes, and here I am at the end of this amazing experience and this huge job. I was like, ‘How did I get here? How did I fool everybody to thinking that I knew what I was doing that they kept me on?’ Here I am, sitting down at a table having this beautiful speech and this lovely thing that the writers have put in the script for me. I, honestly, just felt extremely f—king grateful that I was able to be there with all of those people and to be there with the cast and the crew, and to see it to the end. It is such a privilege, as an actor, to be able to tell the beginning of a character and the ending. So few times do you get to tell a proper ending for a story because often you get cancelled before you do that. It’s a privilege that Warner and DC allowed us to, so I’m very, very grateful.”

McGrath on how Lena’s friendship with Kara helped change her for the better: “I think when you’re surrounded by people who you admire, they make you want to be better. That’s the thing, not just with Supergirl or Kara. There are so many beautiful moments in the last season that Lena had with Brainy and with Nia, with so many of the characters. We are who we are because of the people who we surround ourselves with… I think she looks at all of these people, and she sees heroes around her, and they made her want to be a hero. That’s what I think she means when she says, ‘You pushed me to be better.’ Because I look at you, and you are a hero, and how can I want to be anything less than somebody I admire? I think that goes the same for all of them.”

McGrath on Lena being named Esme’s godmother: “I was like, ‘To be fair, if you’re going to make somebody godmother, don’t you make [it] the richest friend that you know? The Luthors are top five richest in all comic book history, so I’m like, ‘18th birthday? Have a private island. No problem!’ Wouldn’t you choose [her]? I was like, ‘Perfect! Kelly, Alex — smart choice!’

That was very touching, especially for the relationship that Alex and Lena had at the start. To get to that point, I felt, was such a beautiful way to illustrate how far they’ve come, and how close they had come without making a meal out of it. Just a really beautiful touch, and it was a very classy and gentle move by the writers. I really appreciated it and thought it was very elegant.”

McGrath on what playing Lena has meant to her: “Lena is the woman that I wish I was. I’m not. I’m anxious and scared, and sometimes don’t even want to leave my bedroom and the comfort of a cup of tea and a good book. But you look at somebody like Lena, who is vulnerable and she’s scared, she still gets up, and she still fights. For me, personally as Katie, that’s what a hero is: when you feel fear, and you still do it. Lena, as a character, was that for me. To be able to spend five years playing somebody that I admire, and that I wish I was, I like to think that maybe she’s given me a little bit of it. Not a lot because I’m still me, but hopefully I’m a little bit of a better version of myself. I have her to thank for that… [and] the writers and the producers for creating her and trusting me with her for five years.” 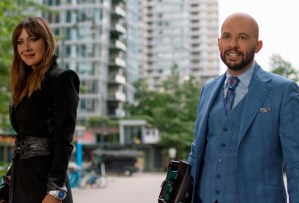 Cryer on Lex’s fitting ending: “Well, I didn’t like it at first because I want Lex to win. It’s the end of the show. Supergirl isn’t going to be around anymore. How about Lex just wins? Just give him a bone! But I thought it functions well in a lot of ways because it’s genuinely awful, and he’s a genuinely awful person. But also, [Nxyly is] in there with him so he can pursue her and be turned down by her for thousands and thousands of years. Wonderful and awful at the same time.”

Cryer on Lex being driven by fear and how that led to his downfall: “His motivation through the entirety of the series is entitlement and rage and feeling as though the arrival of Superman — not necessarily even Supergirl, but Superman back in the day — just his arrival on Earth was such an insult to Lex. To quote Michael Jordan, ‘and he took that personally.’ That he would end up shooting himself in the foot in such spectacular fashion is very satisfying because he is the epitome of self-involvement. He’s narcissistic and self-involved and entitled — that is him as an icon. The whole journey of the show has been leading up to that.”

Cryer on whether he thinks Lex can escape the Phantom Zone: “I think that’s a possibility because in every prison he’s been in, he’s ended up having the place wired within a couple of months. So I have no reason to suspect he wouldn’t do the same with the Phantom Zone. In that respect, he’d be even more motivated by revenge and even more tapped into an even worse group of friends. If anything, the Phantom Zone would make him more dangerous.”

Cryer on whether he he’s down to appear in Superman & Lois: “I’m open to it. The quarantine was the biggest thing that was making shooting difficult [for a crossover], but now that that’s gone, it’s a whole different situation. I loved being this Luthor in the Arrowverse, and I want to respect that. If producers come up with good arcs for the character, I’m absolutely up for it.”