For six seasons, Kara has been a symbol of hope and goodness, using her superpowers to help those in need. The show’s central thesis positioned the Kryptonian hero as a savior to others. But that notion was flipped on its head in the final hour when Kara realized that helping others to empower themselves made an even bigger difference.

THE FINAL BATTLE | Formerly on the same side, Nyxly and Lex were now at odds battling it out on the streets (and buildings) of National City. Since they both had shards of the AllStone (Kara possessed the other), the energy from their epic fight were draining each of the totem’s elements — hope, love, dreams, truth, destiny, humanity and courage — from the world.

However, the Super Friends devised a workaround. Brainy’s Legion crown projected a powerful speech from Supergirl to the masses, and Lena cast a spell that allowed everyone to be more receptive to her message — empowering humanity while simultaneously disempowering the AllStone.

It seemed like a level playing field until Nyxly and Lex called in past villains for backup, including Season 1’s Red Tornado and Supergirl’s evil alter ego Overgirl from Crisis on Earth-X. The Super Friends also found reinforcements with the Legion’s Mon-El and Winn — it turns out Kara’s speech made a big impact in the future — and James Olsen, who dropped by to fight alongside his sister Kelly. Alex and Kara’s mother Eliza also joined in on the fight, shotgun and all.

In one final twist, Lex summoned a portal to the Phantom Zone and threatened to banish the Super Friends if they didn’t hand over their piece of the AllStone. Unfortunately for him and Nyxly, though, the Phantoms were drawn to Lex’s hubris (disguising his fear) and carted both villains away instead. 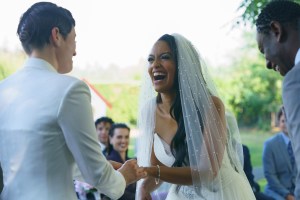 THE AFTERMATH | The show paid a heartfelt tribute to William, who was murdered by Lex in last week’s episode. Our heroes came together for his funeral, with Andrea declaring that she would set up an award in his honor.

In the wake of the battle with Lex and Nyxly, J’onn was given permission to bring back the DEO — which Winn already knew because he’s from the future — but they were going to do things differently.

Mon-El revealed that he won’t be returning to the past again, since he’ll be busy with the Legion once Brainy merged with the Big Brain. Speaking of, Brainy broke the news to Nia that it was time for him to leave. The longer he remained, the more he put the Big Brain at risk. After a sweet goodbye, he and Nia parted ways.

Quick vignettes from the future showed Lena starting her own foundation; J’onn, Supergirl and Alex announcing the new DEO; Andrea unveiling a journalism school in William’s honor; and Dreamer opening a center for LGBTQ outreach.

A SURPRISE RETURN | Kara received a call from the Cat Grant, who was concerned about the amount of sunblock in the ocean and sea turtles being strangled by abandoned ghost nets. She bought back CatCo and wants to focus only on the stories that matter. Oh, and she’s hiring Kara as her new editor-in-chief.

THE WEDDING | Supergirl went all out for Alex and Kelly’s big day. J’onn literally wrote his congratulations in the sky, Eliza told Alex she’s proud of her and James gave Kelly a signal watch so they could “watch each other’s backs” anytime they need to.

In a huge romantic gesture, Brainy returned from the future to be with Nia. What’s the value in protecting the space-time continuum if he can’t be with the woman he loves? Brainy also brought up a valid point: The future hasn’t been written.

Kara and Winn sang a stripped-down version of Pat Benatar’s “We Belong” as both Kelly and Alex walked down the aisle. J’onn officiated the emotional ceremony, which ended with happy tears and a new box to check on their tax returns. 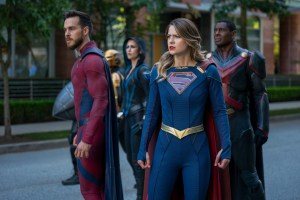 Winn assured J’onn that the new DEO won’t be violent like before and casually slipped in that he and M’gann have a son in the future. Plus, James gifted Esme a camera similar to the one that was given to him by his father. Alex and Kelly later revealed that they’ve named Lena as Esme’s godmother.

The evening saw everyone dancing like goofballs and the OG Super Friends — Kara, James and Winn — reminiscing about the old days. Oh, and Nia caught the bouquet, hinting at another wedding in the near future.

KARA’S IDENTITY CRISIS | Kara’s been floundering since defeating Lex and Nyxly. Still struggling with hiding her identity as Supergirl, she’s been on the fence about Cat’s offer and hadn’t accepted because she hasn’t felt whole. This prompted a phone call from Cat, who casually revealed that she knew Kara was Supergirl all along and encouraged her to finally embrace her full self.

In a heartfelt one-on-one with Lena, Kara shared her fears for revealing herself to the world and wanting to protect those around her. Lena reminded Kara that if anyone came for her family, they would take them on together. That was the push Kara needed to ditch her signature glasses for good.

In a final gathering with her friends, Kara toasted to the last six years together and to new adventures. The series ended with Cat Grant introducing Kara as Supergirl to the world.

How did you feel about Supergirl‘s ending? Let us know your thoughts in the comments, and grade the finale below.