The bond between Dr. Samuel Finnix and his nurse Leah Turner on Hulu’s Dopesick is so strong that she supported him even after he was no longer a doctor — because he was still her friend.

That’s the point that actress Arischa Conner, who plays Leah, says she hopes fans of the limited series understand, especially because it was Leah who turned him in to the police. And when Episode 7 streams this Wednesday, viewers will see how much Leah’s help truly paid off.

“Leah has been working with Dr. Finnix for a while,” Conner emphatically tells TVLine. “No one in town would hire her, and he hired her. She’s loyal to him, and they’ve been working together for so long. She was there when his wife died.”

The registered nurse also saw the drastic changes in his behavior, appearance and professionalism beginning in Episode 4 when he became addicted to opioids, but she didn’t want to overreact, Conner says.

“She saw the changes in him, but Leah didn’t know what was going on,” Conner explains. “When he came in late, that clearly was not the first time she had seen him like that. When he was doing the surgery, it confirmed he was on something, and after she stopped him from operating, Leah felt conflicted. As a nurse, she had to do the right thing. You can’t practice on people in that condition. But as his friend, she loves him. He’s a mentor to her.” 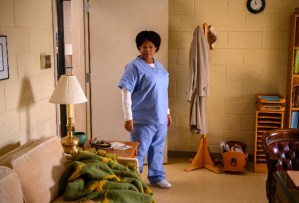 Conner says she used that internal conflict to inform her performance as well as her personal admiration for Michael Keaton as an Oscar-nominated actor.

“I thought about how hard it would be for a parent or even a child to turn in a loved one,” says Conner, whose credits also include Apple TV+’s Swagger and its upcoming series The Last Days of Ptolemy Gray.

If Leah hadn’t rummaged through his office and found that bag of pill bottles to give to the police, Dr. Finnix might’ve died or killed someone, Conner adds.

“She knew what she had to do,” the actress says. “It was the right thing. If Leah hadn’t turned in Dr. Finnix, he wouldn’t have gotten the help he needed. The rehab clinic he was at was more for alcoholism than opioid abuse. But because she worked at the hospital, Leah was able to learn what opioids do to the human brain and tell him about the methadone clinic. It all fits together.”

What do you think of Hulu’s Dopesick so far? Drop your thoughts in the comments.