You don’t have to like Condola to have appreciated her motherhood struggles in Sunday’s installment of Insecure.

The split-screen juxtaposition between Condola and Lawrence, as she cared for their baby boy around the clock while he got to party with coworkers and make love to a new paramour, proved especially sympathetic. The scene also drove home the point that co-parenting, especially when two people aren’t together, is anything but equal and fair.

“I gave birth to my second child eight weeks before shooting that scene where Condola falls asleep on the toilet, so Condola and I were one. We were right here,” Christina Elmore tells TVLine about her character’s maternal hurdles. “I care less about Condola becoming more sympathetic as a character and more about all moms deserving to be seen with grace, because it’s hard work.” 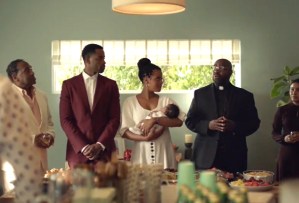 Elmore, who also costars on BET’s Twenties, says her real-life husband is an excellent helpmate but that mothers, regardless of their relationship statuses, are often the ones who care for their newly born babies the most.

“No matter how wonderful your partner is, or even your co-parent, moms are in many cases the primary caregiver,” Elmore explains. “I have two kids and a wonderful husband, and I still do a lot of the parental heavy lifting. And the primary caregiver takes the brunt of the responsibility, gets the lowest amount of sleep, and all of that.”

Making matters worse for Condola is the fact that she and Lawrence (Jay Ellis) aren’t together and can barely get along.

“If you’re co-parenting outside of the same household, I can’t imagine how difficult that is,” Elmore adds. “I’m really grateful Insecure‘s writers and executive producers were willing to show a realistic and authentic portrayal of that experience. Both parents really do love that child, and Lawrence is not trying to be a deadbeat dad. And yet, it is still so hard for them to make it work.” 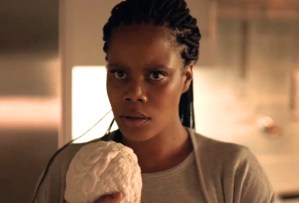 Because Elmore and Ellis are parents in real life, the two contributed real emotions and reactions in their scenes to make the performances as authentic as possible, she says.

“To have such a realistic portrayal of parenthood was pretty terrific,” Elmore shares. “The episode was too real at times. We have fantastic writers. But on the days we were shooting, Jay and I, as parents, brought our own experiences. Thankfully, the writers were amenable to us whenever we said something didn’t feel organic or authentic. Ava Berkofsky, who directed the episode, was also expecting a child with her partner. So there was a lot of baby energy all over that episode.”

Now that the episode has aired, Elmore says she’d love it if Condola haters softened a little to see both sides of the story that the installment explored.

“Condola didn’t do anything but have sex with a man she was dating,” Elmore surmises. “And sometimes, sex makes babies. Isn’t that crazy? But it makes sense, if you think about it.”

Has Insecure successfully changed the way you think about Condola? Why or why not? Drop your thoughts in the comments.