Warning: This post contains spoilers from Season 3, Episode 4 of Succession.

When Adrien Brody was given an opportunity to appear on HBO’s Succession, he got strong encouragement from someone close to home.

“When my girlfriend found out that I was offered a role in it,” Brody tells TVLine, “she said, ‘I don’t care what the role is! You’re doing it!'” It helped that Brody was also a fan of the show, and that the producers gave him “something wonderful to chew on,” as he puts it: the role of activist investor Josh Aaronson, who tries his best to broker a truce between Kendall and Logan to stabilize the future of Waystar. In Sunday’s episode, Kendall and Logan played nice to win Josh back over to their side, but a health scare for Logan left things in doubt, as Kendall spotted Josh cozying up to his rival Stewy. (Read our full recap here.)

Below, we chat with Brody about Josh’s motivations at that beach summit — and his surprising take on where Josh goes from here.

TVLINE | We don’t really get a lot of background on who Josh Aaronson is. What kind of guy is he, personality-wise?
We based him on a number of influences, and some are people that I have encountered in my lifetime. I feel like he’s a much more present person, and that’s what I wanted to convey: someone who’s much more rooted in reality. Even though he’s up in the clouds, he’s not lost and far and away like others may be at times. He’s newer money. That used to be an indication of a crass, uncultured quality, but in today’s world, we have this new generation of young people who have made it quite big and have a very different relationship to money and a different relationship of what the expectations of society are. They live in a very different space. I wanted to infuse an element of that, and also an environmental awareness. Not that that’s his main cause in life, but that he’s someone who is genuinely aware of where the world is right now, and there’s a need to be conscious of that. So that was all built in within him and something I tried to convey in the way he dressed, how he interacted. 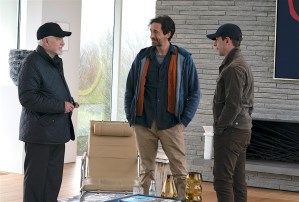 TVLINE | Josh almost tries to play family therapist with Kendall and Logan, and he seems friendly with Kendall, but this isn’t a selfless act for him. He says he’s lost $350 million on Waystar. How much of this effort is just him trying to protect his investment?
I think most of it. I think there isn’t a true friendship there. Look, a lot of people are friends. I have a lot of friends, and when things are really bad, I have less friends, and when things are really great, I have more friends. And that is life. It’s not even so calculated. When you guys are all doing great together, you can go out and drink and have fun and tell war stories, and life is good. You have a lot in common. You’re friends. But is there a real deep bond that would endure beyond losing a great deal of money for one or the other? Hell no. It’s business. He’s not malicious. I didn’t try to convey him in that way. I don’t feel that he is a complete jerk. I think he’s just got a lot of power in this moment, and he’s a powerful person, and he’s used to dealing with very powerful people. And [Kendall and Logan] are in a position of weakness. So he’s playing with the circumstances and wondering what the outcome will be. And that will determine much of how they’re going to proceed, together or apart.

TVLINE | During that meeting on the beach, Logan tells Josh what he wants to hear, but how much of that does Josh actually buy? Does he sense that he’s being sold?
Yeah, I feel like he does. He wants to believe that things are going to come together. At least that’s how I played it. He likes Kendall. But his behavior is erratic and not healthy and definitely doesn’t encourage a sense of faith in how things may go. Just all the optics of it are tough for him to come to terms with. So he’s just listening. He’s figuring it out.

TVLINE | By the end of the episode, he does go over to Stewy’s side…
No, he doesn’t, necessarily. That’s your interpretation of it.

TVLINE | Well, we do see them hug at the end.
He hugged Kendall, too! 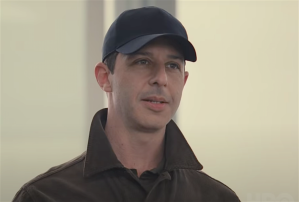 TVLINE | And Roman tells Kendall that he’s out, that he has zero faith in the leadership at Waystar. But you see him still playing both sides at that point?
I see it as: Life is very unpredictable, and there is no easy answer. I think here is someone who has it all laid out in front of him, and he’s really trying to assess what is the best play. Part of it is definitely calculated and perhaps a manipulation, but it’s all fair in these circumstances. He’s trying to determine where things are going to stand and what is best. He alludes to [the fact that] he likes Stewy. He’s telling them that. He’s telling them: How would you feel if I take this in another direction, and what are we going to do about that? Because that’s also on the table. He’s not completely doing a song-and-dance with the guys to go mine whatever info he can and just give it to somebody else. It’s for him. It’s for him to determine what is best, and where the allegiance lies, and if there’s a way to remedy the debacle.

TVLINE | When they’re walking back from the beach, Logan has that health scare where they have to call a doctor. Does that play into Josh’s calculus as well, knowing that Logan may not be in the best of health and may not be in charge for very long?
I think it’s a part of it, yes. I believe that a lot was planned ahead, more so to determine how Kendall takes charge of this, and how he treats his father, honestly. And Logan would have trouble keeping up with all of that. It’s a power play, also, between Logan and Josh, saying, “I can get a cart for you, old man,” and this guy’s saying, “I’m man enough to take on any of you f–kers.” That’s another dynamic. But I think the long play is to see as he fatigues, what transpires, and what reveals itself in both men. And he gets his answers. I think that’s a pretty calculated move on Josh’s part.