Warning: This post contains spoilers from this week’s episode of HBO’s Insecure.

Lawrence was dead wrong to blow up at Condola the way that he did in this week’s Insecure — and Jay Ellis knows it.

As you’ll recall, Lawrence took a job in San Francisco while Condola remained in Los Angeles to raise their son Elijah. Despite living in a different city and barely seeing his kid, Lawrence grew increasingly frustrated with Condola for leaving him out of major decisions regarding Elijah. This culminated in a contentious fight in which Condola revealed she doesn’t trust Lawrence with their son; Lawrence in turn practically threatened Condola with a custody battle if she tried to keep him away.

Ellis, who plays Lawrence, understands his character’s frustration in feeling left out of his son’s life, but also recognizes that his complaints pale in comparison to what Condola is going through as the one who takes care of their son every day.

“He’s just there on weekends,” Ellis notes to TVLine. “Monday through Friday he gets to go to sleep, he gets to sleep all night, he can grab dinner… He can do whatever he wants. He just pops in on a weekend, while she’s doing it day-to-day.” 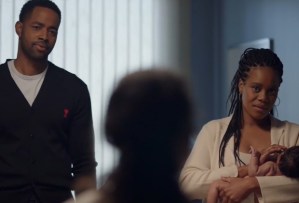 After their argument, Lawrence returned to San Francisco and buried his feelings in angry sex with random women while Condola continued to endure restless nights and everything else that comes with raising a newborn alone.

“He’s trying to force his way in this situation,” Ellis explains, noting that Lawrence’s situation with Condola isn’t something he can easily walk away from as he has done in the past. It was only after a scarily turbulent flight back home that he began to express some compassion toward his baby mama, finally making up with her over the phone.

“In some of those other situations, he could just break up with somebody and never seen them again, or he could quit the job and dip. But now we’re talking about a life, and he wants to be a good father,” the actor adds. “He knows that this is real work for him. He’s going to have to actually dig in and figure out how to make this work with Condola and support her, and be the best version that he can be as a father.”

Being a parent is tough by itself, but it’s even more labyrinthine when you throw in the long distance element, the fact that Lawrence and Condola aren’t in a relationship, and his recent heartbreak after being dumped by Issa. “I think Lawrence is going to have to not let those complications get in his way and ruin what will be one of the best moments of his life,” Ellis offers. 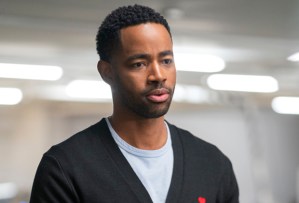 Ellis is fully aware that this week’s episode may land him in hot water with the fans, but he’s perfectly fine with being Public Enemy No. 1. “If you want to sit in your feelings and hate Lawrence and be mad at Lawrence, you should,” he says. “In order for us to let him ride off into the sunset at the very end of this, I do think we have to watch him go through this moment. We might want him to do it a different way, but… he has to go through it his way, and learn from it and grow from it.”

Ellis says that fans can expect more bumpiness ahead as Lawrence tries to navigate fatherhood from a distance. “You’re going to cuss the TV out [and] you’re going to cuss me out,” he warns. “Expect that it’s going to happen, but live in it and be present with it, because I think it’s worth the journey.”

Regardless of how viewers feel about his character, Ellis feels lucky to be a part of a show that resonates with so many people.

Want scoop on Insecure, or for any other show? Email InsideLine@tvline.com and your question may be answered via Matt’s Inside Line.