Prepare to be a blubbering mess when Supergirl airs its series finale next week.

On Friday, The CW dropped new photos from the Arrowverse show’s final hour, titled “Kara,” which will air as part of a double-episode finale on Tuesday, Nov. 9, starting at 8/7c. The pics, which you can check out here, tease an emotional sendoff as Kelly and Alex prepare to walk down the aisle and Supergirl gears up for one last battle.

Our titular hero will be joined in the finale by “familiar faces from the past to help her stop Lex and Nyxly for good,” according to the episode’s official synopsis. As previously reported, original cast members Mehcad Brooks and Jeremy Jordan will reprise their roles as James Olsen and Winn Schott (aka Toyman), while Chris Wood will suit up again as Mon-El. (David Harewood, who plays J’onn J’onzz, shared a photo with Wood and Jordan on set for the finale, which you can check out here.) 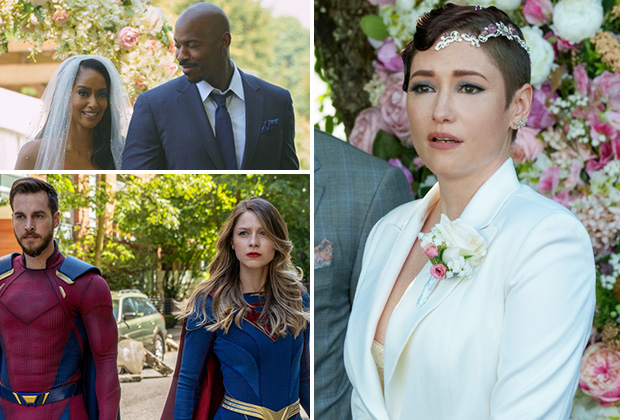 Melissa Benoist, who plays Supergirl, previously opened up about the final week of filming, describing her last days on set as “intense, really emotional, really joyful and fun.”

Meanwhile, Chyler Leigh, who plays Alex, warned fans to be prepared: “There’s a lot to wrap up in the few episodes left, so just get ready,” Leigh told TVLine. “Have tissues, have popcorn, have tequila — whatever works for you. Just be ready.”

The network also unveiled a new trailer for the finale, which you can watch below.

Every moment has led up to this. Don’t miss the two-episode series finale Tuesday at 8/7c on The CW. #Supergirl #StrongerTogether pic.twitter.com/Ww6leGfrnx

What do you hope to see in Supergirl‘s series finale? Are you ready to say goodbye to the Super Friends? Let us know your thoughts in the comments.