It’s the end of an era. With Supergirl poised to bow out after six seasons, Chyler Leigh is opening up about the emotional last day of filming on the Arrowverse series.

“It was all of the emotions,” the actress who plays Alex Danvers aka Sentinel tells TVLine. “Obviously, there are a lot of storylines to wrap up, there’s a lot of hope for the future that we’re trying to set and so…. There was just a lot.”

“You go on, and you think, ‘Oh, we have time.’ But it’s COVID and it’s weird,” she adds. “All this stuff is just totally different. [You] can’t hug people, can’t see people’s faces. It something that you’re so used to doing for the past five years.”

The original filming schedule set Melissa Benoist, who stars as the titular superheroine, as the last person to shoot so that she could deliver a big speech at the end. However, Leigh, Benoist and David Harewood pushed to rearrange the schedule so that all three OG cast members would close out the last day of filming together.

“We were a hot mess,” Leigh recalls of those final days of shooting. “Everybody’s crying. Everybody’s grateful and so appreciative…. Each day, you’re saying goodbye to somebody.”

The first half of Supergirl’s final season found Alex struggling with the loss of Kara, who’d been stranded in the Phantom Zone. And while Kara may have been rescued from that dire desolation, both Danvers sisters are still dealing with the trauma of their respective nightmarish experiences. An according to Leigh, we’ll continue to see them lean on each other as the season progresses. 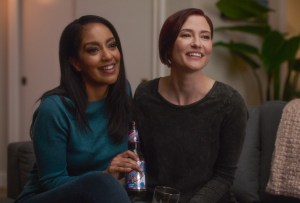 “There are a lot of flashbacks, moments where you’re reminded of how traumatic everything that they went through is, but it’s still the Danvers sisters. They still love each other tremendously and will fight to the death if they had to,” she muses — adding that you shouldn’t take that “to the death” sentiment literally.

The remaining 12 episodes will also see Alex’s relationship with Kelly (Azie Tesfai) continue to prosper, for which Leigh is grateful. “It’s pretty awesome to see Alex finally able to have something,” she explains. “It almost felt like she was getting a bit lost in where to be and what to be. With Kelly in her life, it created that missing puzzle piece. They bring out the best in each other and while of course Alex has Kara, I love to see her have the intimacy and just that love. For Alex to be able to experience that was really, really special.”

Leigh also notes that it was “really important for [Azie and I] to get it right and to not to fight for it, but to really push to make sure that there’s enough coverage of them and representation for the show, and to show a healthy relationship. We know that the fans really appreciated that, and you do get to see a lot more of that for the rest of the season — the two of them in a healthy relationship.”

That’s not to say they won’t face their fair share of challenges: “S–t falls apart and they are dealing with crazy monsters and all sorts of stuff,” she teases. “But to see them hanging strong is really awesome.” 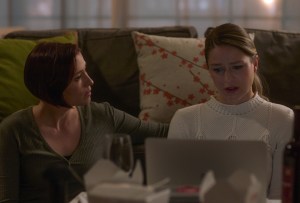 All told, Leigh says she is proud of how far Alex has come over these six seasons. The former director of the DEO, she notes, is continuing to get a better sense of herself and “finding that really solid foundation where she doesn’t feel like things are going to crumble all the time.” Moving forward this season, you’ll see “all the sides of Alex, which is what I’m really grateful for.”

According to Leigh, fans can also expect some “wonderful returns” — Mon-El, Winn and James Olsen have already been confirmed — as well as a jam-packed finale.

“We have all sorts of crazy things that come out at us,” she says. “Jon Cryer’s with us [as Lex Luthor] and we’ve had so many wonderful people come in as our Big Bad. There’s a lot to wrap up in the few episodes left, so just get ready. Have tissues, have popcorn, have tequila — whatever works for you. Just be ready.”