Peter Sarsgaard has played real people in the past. The list includes journalist Chuck Lane in 2003’s Shattered Glass and Robert Kennedy in 2016’s Jackie. Despite this, Sarsgaard is always aware of the awkwardness of portraying non-fiction characters.

The actor is once again eschewing his comfort zone in Hulu’s limited series Dopesick, in which he plays former AUSA Rick Mountcastle. Just as the real Mountcastle did, his character spends years building a case against Purdue Pharma, the makers of OxyContin, alongside his fellow Assistant U.S. Attorney Randy Ramseyer (Castle Rock‘s John Hoogenakker).

In Episode 6, which premieres this Wednesday, Mountcastle and Ramseyer go after Purdue’s misleading medical marketing charts.

“It is weird playing real people,” Sarsgaard admits to TVLine. “Charles ‘Chuck’ Lane actually liked to come to set and watch me do it sometimes. I’d be like, ‘Chuck. Come on, brother. I can’t handle this.’ It’s always really strange, and because of that I didn’t communicate with the real Rick Mountcastle before doing this.”

Sarsgaard relied on his own research instead.

“Everything I learned about Rick Mountcastle came from the script and the book [by Beth Macy],” Sarsgaard says. “That’s all I really needed, because I’m a sensitive person. I wouldn’t feel right about somebody playing me. I try to kind of pretend it isn’t happening on some level, and I just go with my gut. That’s all you really have in the end.”

Watchmen‘s Jake McDorman, who costars as U.S. Attorney John Brownlee, agrees with Sarsgaard. He didn’t talk to Brownlee until after shooting was complete, he says, and counted on guidance from Dopesick showrunner and writer Danny Strong in the interim. 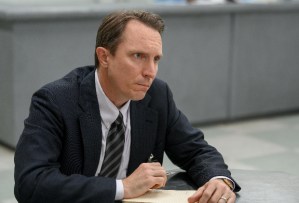 “Danny was constantly talking to Mountcastle, Ramseyer and Brownlee,” McDorman shares, “and giving us their anecdotes.”

In contrast to his costars, Hoogenakker talked to Ramseyer while shooting — and says it helped to inform his performance.

“[Ramseyer and I] had a great, hour-long conversation,” Hoogenakker recalls. “But part of that was because I was just fascinated to get to talk to the guy. I knew we were going to be taking a deep dive into his world, covering 14 years of his life. Their office is still going after pharmaceutical malfeasance. There was more he couldn’t say than he could, but it was great to talk to him.”

What do you think of Sarsgaard, Hoogenakker and McDorman’s performances in Dopesick so far? Drop your thoughts in the comments.