THE PERFORMANCE | As First Lady Hillary Clinton, Falco was so rarely seen in Impeachment‘s first few episodes, it made us wonder why an esteemed actress like Falco would sign on for such a tiny role. Well, after this week’s installment, we’re not wondering anymore: Falco finally got the spotlight and delivered a seismically great performance, expertly channeling Hillary’s rage as the full scope of Bill Clinton’s betrayal became clear.

The episode flashed back to show us how Hillary had stood by Bill when women accused him of sexual misconduct in the past, with Falco summoning up a steadfast loyalty as Hillary methodically defended her husband, her legal training on full display. But when Bill confessed that he “slipped up” with Monica Lewinsky in a private bedroom scene, Hillary exploded on him, with Falco dissolving into tears and recoiling at his touch. When the Clintons traveled to Martha’s Vineyard to celebrate Bill’s birthday, Falco held her face deathly still while Bill told a story about Hillary, as if she refused to admit how hurt she was. But later, she unloaded on Bill, tossing a vase of flowers at his head and cursing him out: “You’ve made me look stupid, and I hate you for that.” (Their domestic strife recalled another great Falco performance: as Carmela Soprano, trading savage barbs with her husband Tony in the classic Sopranos episode “Whitecaps.”)

In the episode’s final moments, Hillary walked down the steps of her vacation home to stand on the beach alone and gaze out at the waves, and Falco managed to convey decades of pain and resentment without saying a word. It’s not easy to figure out something fresh to say about a story as overexposed as the Lewinsky scandal, but that just points to what a talented performer Falco is: She took a tale we’ve heard a thousand times and found a way to tell it to us for the first time. 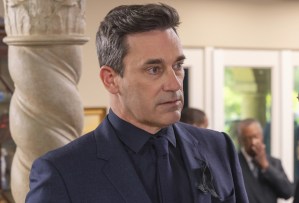 HONORABLE MENTION | It was great to see Larry David back again, of course, as Curb Your Enthusiasm returned for Season 11 this week, but it was even better to see Jon Hamm return for an encore of his hilarious guest spot last season. The Mad Men alum was at his deadpan best as he told Larry about the poor reception his movie character based on Larry received (“The word that kept reappearing was ‘repugnant'”) and annoyed him with his freshly learned Yiddish lingo. He then used that lingo to attack Albert Brooks for hoarding COVID supplies: “A shanda!” We find ourselves wishing for more Hamm appearances on Curb, but maybe it’s best that they’re rare — and therefore all the more delectable. 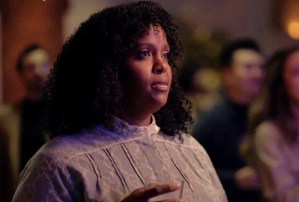 HONORABLE MENTION | “Funny friends” feel pain, too. This is what happened to Natasha Rothwell‘s Kelli during the Season 5 premiere of Insecure. Self-deprecating laughs softened the blow when Stanford initially mistook Kelli for dead at her 10-year college reunion. Hollow recollections of generic purse-carrying and Stanky-Leg dance moves, however, morphed Rothwell’s usually mirthful face into a sulkiness so heavy, all she could do was palm her chin and roll her eyes in disgust on Kelli’s behalf. Pining for sympathy, the Emmy-nominated producer’s alter ego relayed a story of former marching band buds reductively recalling her kale allergy and failing to pay tribute. As her girls responded to the tale with giggles and ribbing, a ridiculously convincing Rothwell had Kelli stare out the car window and apprehensively mutter, “Is everything I do a joke to y’all?” Snarkiness confirmed said fears — at first. But the next morning at brunch, those same well-meaning gal pals lovingly eulogized Kelli and filled Rothwell’s expressive eyes with tears of relief and contentment. 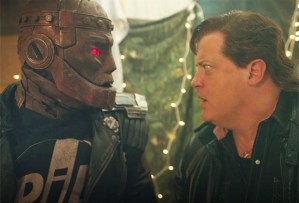 HONORABLE MENTION | Brendan Fraser‘s character on Doom Patrol may exist within a mechanical frame, but there was nothing robotic about his performance in Thursday’s episode, which found him acting opposite himself as both man and machine. The gang’s latest vision quest forced everyone to confront the dark secrets hidden within their subconscious, a journey Fraser navigated with heart and humility, all the while maintaining Cliff’s signature screw-it-all flare. From his character’s moments of quiet reflection — including the devastating recollection of his wife’s death — to the unbridled rage he rightfully directed at himself, Fraser nailed every beat, making Cliff’s misery an unexpected joy to watch.