One needn’t look any further than Jason Sudeikis‘ liked tweets to know what he (probably) thought of Mitt Romney’s Ted Lasso costume.

The Utah senator on Thursday shared a series of GIFs on Twitter costumed as Sudeikis’ Emmy-winning alter ego for Halloween — and the first of those tweets seemed to confuse the British football comedy with American football drama Friday Night Lights.

“If you believe in yourself, and have clear eyes and full hearts, you can’t lose,” the senator said. (The caption also might have been a reference to Romney’s, ahem, “borrowed” 2012 presidential campaign slogan.)

A subsequent tweet saw Romney exchange “biscuits with the boss” — or, in this case, Arizona senator Kyrsten Sinema, who was dressed as Hannah Waddingham’s Rebecca Welton.

Sudeikis, who famously doesn’t tweet, but spends plenty of time liking tweets, chimed in by way of a response from former Saturday Night Live writer/producer Alex Baze, who had this to say about the Republican politician dressing as one of TV’s sweetest characters for All Hallows’ Eve: “The scariest thing he could think of was kindness.” 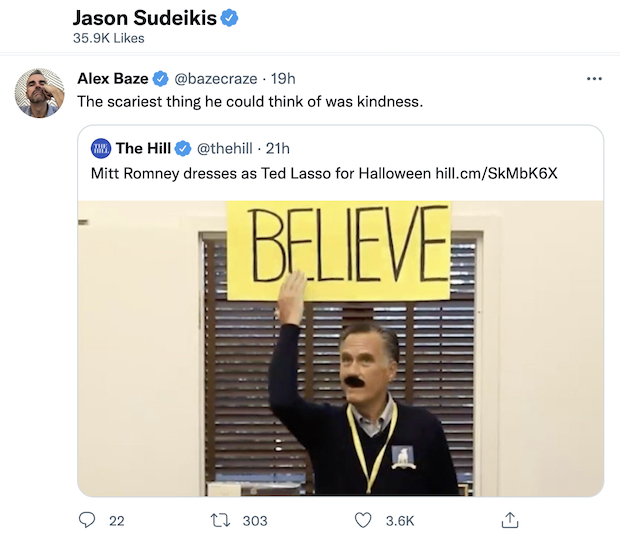 In a final tweet, Romney explained that he was simply “returning the favor,” 10 years after Sudeikis first started impersonating him on SNL. But the connection was beside the point as far as several late-night talk show hosts were concerned. Sudeikis’ former SNL costar Seth Meyers gave his take on Romney’s costume during Thursday’s Late Night.

“Man, you know you’re unpopular when you single-handedly ruin one of America’s favorite TV shows,” Meyers began. “This just proves once again that we desperately need Roy Kent in Congress, because that picture makes me want to ‘f—king puke,'” he exclaimed, queuing up a clip of Brett Goldstein’s gruff alter ego to finish his sentence (watch here).

ABC’s Jimmy Kimmel also weighed in on Romney’s Lasso (and/or Super Mario) homage. Responding specifically to Romney’s photo alongside Sen. Sinema, he said: “Aww, aren’t they cute? They’re having so much fun while the country dies… Twitter needs a ‘This May Be Vomit’ button on it.”

What did you think of Romney’s Ted Lasso costume — and of Sudeikis’ (sort of) response? Hit the comments with your reactions to it all.