A new generation of misfits took to the stars in the series premiere of Star Trek: Prodigy, which is now streaming on Paramount+.

Dal R’El, a maverick teen with a penchant for talking, plotted his escape as a worker on a desolate mining planet. He soon found himself interrogated by Drednok, a menacing figure in search of an energy-based, telepathic life form known as Fugitive Zero. Dal nearly got away, until his tiny shuttle fell back to the surface.

Meanwhile, Gwyn, a teenaged Vau N’Akat with dreams of exploring the stars, focused on serving her leader, the “Diviner.” The young translator volunteered to interrogate Dal about Fugitive Zero, unaware of her boss’ ulterior motives. 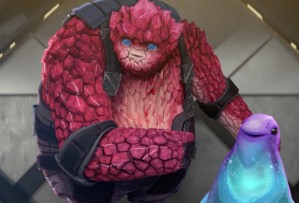 While held in captivity, Dal continued his efforts to escape, which impressed the ambiguous figure in the next cell. Dal was special because he still had hope — something they lost a long time ago. In a one-on-one conversation with Gwyn, Dal attempted to trade information about Fugitive Zero for a spot on a Kazon ship that would get him off the planet. Though it was clear Dal knew nothing of Fugitive Zero, Gwyn gave him until the end of the following day to locate the missing telepathic lifeform.

During his search, Dal befriended a bulky, crater-like and deceptively young teen named Rok-Tahk. After a mishap involving a laser gun and a bunch of falling rocks, the pair stumbled onto an abandoned Federation ship — the USS Protostar. They eventually found Fugitive Zero, who revealed it was used as a weapon and forced to do horrible things before finally getting away. Now that they’ve uncovered the Protostar, they had a way to get off the planet for good.

New recruits boarded the ship, including Jankom Pog, a teen Tellarite who would serve as their engineer, and Murf, an aggressively cute blob who squeaks.

Gwyn again captured Dal and sent him to work the outer rim, only to then stage an escape and follow him back to Fugitive Zero. Both Gwyn and Drednok were surprised to see that Dal had found the Protostar, which Gwyn’s father had been searching for, for years in the mines. The crew managed to evade Drednok, capture Gwyn (tying her to the captain’s chair in the process) and escape the mining planet through a drainage pipe.

After struggling with system controls, the newly formed crew found some much-needed aid in Hologram Janeway (voiced by Voyager‘s Kate Mulgrew), who will help train them for exploring the galaxy. Thus, a new adventure was born.

They may have escaped, but the danger was far from over. A final scene revealed a man — likely Gwyn’s father — calling for his ship….

What did you all think of Prodigy‘s first episode? Grade the premiere below and sound off in the comments!