Warning: This post contains spoilers from Season 3, Episode 2 of Succession.

When Succession‘s Roy siblings get together, Alan Ruck’s Connor is always the elder statesman.

This week, Kendall summoned his sister Shiv and his brothers Roman and Connor to a secret meeting in his daughter’s bedroom in an effort to get them on his side in his power struggle against Logan. (Read our full recap here.) After much spirited (and vulgar) debate, the other siblings seemed to actually consider jumping ship and teaming up with Ken — until Logan sent them a box of donuts for their “tea party,” letting them know he’s on to them and scaring the others into sticking with him. When Connor said no, Kendall insulted him on the way out, calling him “irrelevant”… but earlier in the episode, Connor got an actual apology from Logan (!) for his rude reply to Connor’s request for money last season.

Kendall may think Connor is irrelevant, but the eldest Roy sibling might just play a key role in the rest of Season 3. TVLine chatted with Ruck about what Connor was thinking during that bedroom meeting, where things stand with his relationship with Willa — and what his political platform is, exactly. 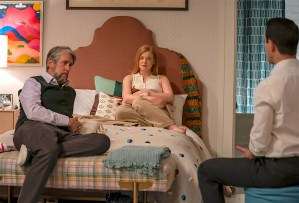 TVLINE | This episode was pivotal, with the Roy sibling summit in the kids’ bedroom. Why did Connor go there, and what was he looking to get out of it?
Just to see if he has any leverage, if anybody needs him, because if somebody makes a play and is like, “Look, I really need your support, I need you”… Kendall wants us all to line up behind him against the old man, and it’s just like, “OK, what’s in it for me?” That’s the bottom line. “What do I get out of it?” And then as time goes on, if I support the old man, what is there for me at Waystar? “Would you reconsider that loan I asked you about?” It’s always that. Money is God.

TVLINE | Connor is a bit older than his siblings. It always seems like he’s on the outside looking in, somewhere between dad and brother. Does he feel left out?
Oh, absolutely. Logan divorced Connor’s mother when Connor was about eight years old, and he didn’t see his pop for years, actually. Then he lived with his mother, who we’ve found out had some mental challenges, so it was not a happy boyhood. And then Logan produced with Caroline the golden trio of these three exceptionally bright, wickedly entitled, snotty little children. And I think Connor has been an object of ridicule and derision for them from the time they were quite young. Certainly by the time they were 10 or 11 years old, they were like, “Connor… let’s set him on fire.” So yeah, he’s always felt like he’s knocking on the glass saying, “Open the door.” I do think that Connor has genuine affection for his brothers and sister. On some level, maybe they do, too. But you know, everybody’s so self-involved. He’s not at the top of anybody’s list.

TVLINE | Connor is still mulling a presidential bid, but I’m not really clear on what his platform is, exactly. Is Connor even clear on it?
I think it’s whatever he wakes up and is interested in that morning. That’s part of his platform. I think the platform is very fluid, and sometimes it doesn’t exist. In Season 2, Maxim asks if he [can name a member of the House Congress Committee], and he doesn’t have a clue. Basically, do you know anybody in D.C., and what they do? It’s not a matter of concern for him. It’s like, “Oh, I’ll figure that out on the way. That’ll take care of itself. There are going to be people to assist me.” He wants to eliminate all taxes. Connor might come up with the idea, if he wants to be a man of the people, that basically every family should incorporate. “The family business is a corporation, and you write off everything! We do it!” I just want to pass this wisdom along to the common folk. 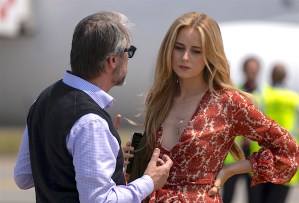 TVLINE | How’s his relationship with Willa this season? He wants to turn her play into a “hate watch,” which she’s not happy about.
Well, it’s up and down. When the play goes south, Connor is just worried about money. Especially at the beginning of Season 3, he’s very concerned about finances. He’s looking to get out of the Broadway show with as few scars as possible. He’s not a complete a–hole… I think he actually is crazy about her. I mean, none of them know what love is. None of the other ones can hold onto a spouse. They can’t do it. Connor found this great girl who just happened to be a professional, but he’s like, “This is great! You’re the perfect girlfriend! I have lots of money! You need money, I’ve got money!” But I really think he adores her, and I think she’s starting to develop some feelings for him, although it may not be in her best interest.

TVLINE | You mentioned a few things about Connor’s backstory. I feel like we don’t know as much about Connor as we do the other Roys. Are there parts of his biography that you’ve filled in that we haven’t seen on screen yet?
Yeah, I just made this stuff up. [Series creator] Jesse [Armstrong] has dropped some clues about who my mother was, the fact that she’s no longer alive. So I just sort of figured out what this guy’s boyhood and early life was like because of these things.

When I went away to college in the ’70s, there was this group at the University of Illinois called The Society for Creative [Anachronism]. They dressed up like medieval lords and ladies, or people from the early Renaissance, and the guys had shields and swords made out of bamboo, and they used to whack the hell out of each other. And then the ladies would dress up with the conical hats and the tassels and the high-waisted things. They would try to speak to each other in archaic English. And I was like, Connor would’ve really dug that. He would’ve been a member like that. [snaps fingers]

I think Connor reads a great deal, but I don’t think he reads anything current. He reads, like, Marcel Proust or Dostoevsky. Stuff that’s already been evaluated. And he’s like, “Oh, this is a fabulous book.” I did read Dostoevsky’s The Idiot because I felt that Connor would identify with Prince Myshkin. But whereas Prince Myshkin is sort of Christ-like and wonderful, Connor actually may be an idiot. [Laughs] He’s just surrounded by people, like Myshkin, where everyone’s concerned with status and wealth. But Connor sees himself as being somewhat above that, although he’s very happy that the money keeps coming in.