Two of the most important relationships in Issa’s life hung in the balance when Season 4 of Insecure came to a close last year.

It was unclear if Molly and Issa could be besties again after fighting so much, and her couple status with Lawrence became less of a certainty after Condola became pregnant with his child. Thankfully for fans, the answers to both of those conundrums got cleared up when Season 5 of the beloved HBO comedy premiered Sunday.

Titled “Reunited, Okay?,” the opening installment kicked off the show’s final season and centered Issa, Molly, Kelli, Tiffany and Derek as they attended their 10-year college reunion at Stanford University. Best of all, the college had paid for Issa to fly in to speak on a panel about her burgeoning career as an entrepreneur and event planner for her company BLOcc (Black Lives, Opportunities, Culture and Connection).

At first, Issa, who kept comically forgetting what the last “c” in her company’s acronym stood for, was pumped about the opportunity to promote her professional endeavors. But midway through the panel, when she realized the crowd wasn’t feeling her or her 2Pac references, Issa began to doubt her vision and wonder aloud if her desire to merge her passions with her ideas was a waste of time. 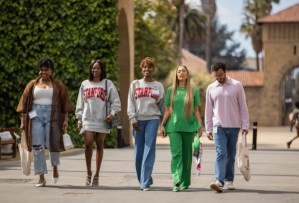 Molly, who had recently broken up with Andrew, was also questioning her personal and romantic prospects and considered reconnecting with an old flame from her college days who recently had gotten a divorce. Part of her wanted to give Omari a chance, but the other part of her wondered: Was he to blame for his divorce, or was it his ex-wife?

As the two women struggled with these choices, they also awkwardly engaged with one another despite their best efforts to be cordial and friendly. When Molly finally asked if they were going to be cool, Issa deflected and focused on an invitation to party with their old friend from Stanford named Cheyenne, who had dropped out of school to become a dancer for Ciara. But clearly, Issa and Molly didn’t know Cheyenne very well, who later robbed them of their purses and Molly’s watch and shoes. Issa tried to give up her shoes, too, but they were too plain and low-budget for Cheyenne and her robber boo, and they passed.

Horrified, Issa and Molly returned to Tiffany’s car and told her and Kelli that Cheyenne had set them up and robbed them with an armed man pretending to be a stranger, and suddenly, they couldn’t stop laughing. Blame it on nerves or the guttural guffaws that life-threatening events can inspire, but Issa and Molly laughed harder than they had in a long time, and then they were close again. 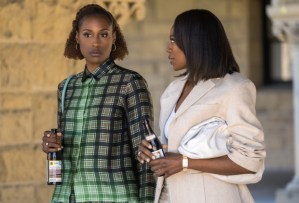 The following morning, when everyone eulogized Kelli, whom Stanford had mistakenly and hilariously listed as deceased, Issa and Molly bonded even more. Issa said she just wanted to move forward, and Molly agreed. Besties forever.

Issa’s situation with Lawrence was a lot more complicated. He picked her up at LAX with a kiss, and things seemed to be going swimmingly until they arrived at Issa’s place and she couldn’t hold in her doubts and fears about his status as a father-to-be any longer. Issa said she had some time to think about their relationship, and then the tears welled up in her eyes before she could finish the sentence, and Lawrence said he understood. Their rekindled love and hopes would have to be dashed once again.

What did you think of the Season 5 premiere of Insecure, and did you enjoy writer and executive producer Amy Aniobi’s reappearance as a hip-hop flautist? Grade the season opener in our poll, and drop your thoughts in the comments.