Will Larry David ever learn? Thankfully for us, no, he probably won’t.

When we last saw Curb Your Enthusiasm‘s Larry (it’s been a while, so read a Season 10 finale recap here), he was embroiled in a bitter battle with his coffee competitor Mocha Joe, who ended up moving in next door to him following the accidental fire that destroyed both of their shops. Unsurprisingly, Larry is still a social nightmare, and in Sunday’s premiere, an odd backyard discovery threatens his burgeoning new romance and his upcoming Netflix series.

So what shenanigans is Larry getting into this season? Let’s recap.

In the middle of the night, Larry is awakened by a loud crash. His back door is open and when he flicks on his floodlights, he finds a dead body floating in his pool. (OK… did NOT see that coming!) The cop who arrives to the scene scolds Lar’ for not having a fence around his in-ground pool, but L.D. ultimately gets off with a warning.

The next day, Larry and Jeff attend a meeting at Netflix, where he pitches a show about a 20-something version of himself. In the show, Larry would try to off his rich uncle so he could inherit the man’s fortune — and the streamer loves the idea! (We also learn that this season exists in a post-pandemic world… thankfully!) 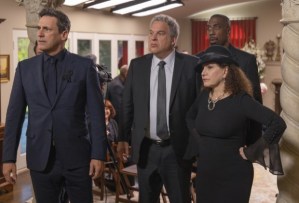 On their way out, Larry chases down his friend Dennis who owes him money, but according to Jeff, the man has early on-set dementia. (I’m cringing already.) Larry tells him he never paid him for a golf trip, and the man is taken aback by being rudely stalked. “You know what’s rude? Owing somebody $6,000 for six months, and never mentioning anything about it and not paying them back! That’s rude!” (I mean, Larry has a point!) Nevertheless, the guy says next time they see each other at the club, he’ll write the check.

Meanwhile, Albert Brooks is planning a “live funeral,” which basically means he’s not dead and just loves attention. Friends and family should say nice things to a person before they’ve kicked the bucket, Brooks says.

Later at a dinner party, Susie plops on the couch next to Larry, causing him to spill a glass of red wine all over the couch. Seconds later, Larry walks directly into a glass screen door. Afterward, Larry drops off his date (who is Lucy Liu playing herself, by the way), but instead of inviting Larry inside, she tells him she had “a big night” and sends him on his way. The next day, he tells Leon and Albert that “something is off” with Lucy, and they’re all: Dude, you walked into a door! Once they’ve seen you in “that way,” there’s no sex anymore, says Albert.

Larry finds an envelope outside that outlines his fencing snafu, so he goes to a Mexican joint to meet Marco, the brother of the guy who drowned in his pool. Really, Marco just wants to get his daughter a role in Larry’s new series. Larry tries to explain that there isn’t a role for her in the show, and after some back and forth (and a bunch of sly threats), he offers the girl an audition. It’s a total extortion job, but Larry has no option but to relent.

At the golf club, Larry reminds Dennis of the check he’s owed and, of course, it turns into a screaming match. A couple other golfers say they heard Larry walked into a screen door, so maybe Larry’s misremembering after all. 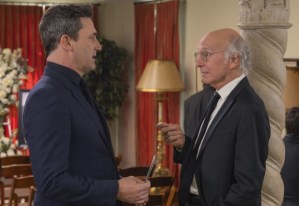 The day of Albert’s “funeral” comes, and Larry yells at Susie that she’s a “plopper” (“You’ve always been a plopper!”), and while he’s re-enacting “the plop,” Susie’s bracelet bounces off a glass coffee table and a stone pops out. (For the record, SHE TOTALLY PLOPPED.) Later, Susie tells Dennis, who’s also her jeweler, that Larry was, in fact, the plopper. This is all madness, but I guess they’re both kind of right now.

At the “funeral,” Larry runs into Jon Hamm, and later, Lucy, who hands him a glass of water, so he’s lucid when he’s speaking at the podium. They get into an argument and she storms off.

Larry begins his speech, and every line is riddled with jokes about how Albert is actually alive, which does nothing but aggravate the “deceased.” (“I hate him,” Albert says from another room.) After introducing Hamm, Larry looks for a bathroom, and finds out that Albert is “a COVID hoarder” — meaning, he has a closet littered with hand sanitizer, toilet paper and other essential supplies that frontline workers desperately needed during that time. This causes all of the attendees to start yelling in disgust. Sure enough, the event tanks and everyone bails.

The day for auditions comes, and Marco’s daughter arrives with zero resume and a faux-headshot of her cooking in the taqueria’s kitchen. And she’s terrible. She mispronounces everything, her inflections are all wrong. It’s a garbage audition. “We got her!” Larry exclaims loudly to a room of confused executives.

Did Larry just tank his own show before it even began? Grade the premiere below, then light up the Comments section!