For those of us watching The Blacklist from our couches, it’s only been four months since Elizabeth Keen was gunned down in the street, just as she was finally closing in on legitimate answers about Red’s identity.

But for the characters on the NBC crime drama, it’s been two whole years since Liz perished, as revealed during Thursday’s Season 9 premiere. The FBI task force is no more, and Red’s whereabouts are unknown… for a few minutes, at least. Read on for the details of The Blacklist‘s reset — not only via a time jump, but now without leading lady Megan Boone and series creator Jon Bokenkamp.

* First, some quick updates on where everyone’s at after two years. Dembe is a special agent with the FBI (?!), and he’s been working undercover for the past six months to infiltrate a dangerous crime syndicate; for now, all we (and Dembe) know about the group is that they’re after valuable microchips, and all of the men have a notable “S” tattoo on their hands. Early in the premiere, Dembe and his FBI partner have a meet-up with members of the syndicate that goes awry, resulting in the death of Dembe’s partner, the fiery explosion of a truck containing the stolen microchips, and third-degree burns across Dembe’s body. He ends up in the hospital, and he’s not doing amazing.

Cooper is no longer with the FBI, but he’s Agnes’ guardian. A bearded and longer-haired Ressler now spends his time fixing up old cars. Aram is also gone from the bureau and has co-founded a cybersecurity start-up called Flagify, which badly needs an angel investor. And a recently married Alina no longer does field work for the FBI, but trains agents for the field. Reddington, meanwhile, is hiding out in Havana — and despite his terminal mystery illness, he’s somehow survived the past two years, largely thanks to two female shamans who protect Red’s mind and body wherever he goes. 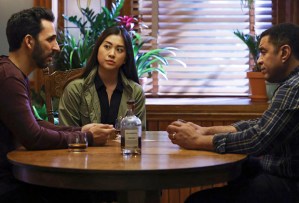 * Following the attempted microchip theft that left Dembe burned — both literally and figuratively — Dembe suspects Red would know something about the crime syndicate in question, but he hasn’t spoken to Red in 18 months and doesn’t know how to reach him. As Agnes’ caretaker, Cooper can reach Red, and it falls to him to try getting the band back together in order to thwart the microchip-hungry criminals.

* The culprit turns out to be just one criminal, really: He’s called The Skinner, a moniker that’s been passed down to criminals fulfilling this role for centuries. Red happens to know the previous Skinner, but he’s reluctant to help Cooper with the task of finding the current one. In the past two years, Red says, he’s learned what to hold onto and what to let go of; if he comes back to help Cooper, “I fear all that work will be for nothing,” he remarks. “Down the line, things would get very dark.”

Red does briefly return to the States to assist, but only to identify The Skinner. When it comes time to track him down and apprehend him, Red bows out, telling Cooper that he recently achieved inner harmony at a monastery, but that peace is as fragile as an origami swan; if he stays here, it will be crushed. Aram and Alina, meanwhile, are easily persuaded to help Cooper in his pursuit of The Skinner (much to the chagrin of Aram’s business partner and Alina’s husband), and Ressler is tougher to convince, but his love for Liz ultimately drives him to help.

* When Red decides to recuse himself from the chase of The Skinner, Cooper wonders if he’s doing so for the sake of his inner peace, or because he’s hurt that Cooper won’t let him have contact with Agnes. Red pretends the boundaries between him and Agnes don’t upset him, but one of his shamans later tells Cooper, “Keeping the girl from him is cruel. Is that what you want? To be cruel?” (Cooper ponders that question seriously.)

But even after losing access to Red’s tracking expertise and intel when he decides to return to Cuba, the rest of the group — Cooper, Alina, Aram, Ressler and even Dembe — are still interested in forging ahead with the Skinner hunt, despite their considerably scarce resources. It’s a new version of the task force, a bare-bones one, but they all look pleased to be working together again… even if Aram’s new company and Alina’s marriage are definitely going to suffer because of it.

At the end of the premiere, before Red’s plane leaves for Havana, Ressler pays him a visit. Which is kind of a big deal! Ressler blames Red entirely for Liz’s death, and he previously said he’d never want to be in a room with Red again. But Ressler feels strongly that Red must return his attention to The Blacklist, if only so Liz won’t have died in vain. “The Blacklist was her calling. If we loved her, it has to be ours,” Ressler tells Red. “That’s why I came back. As much as I hate you, I loved her more.”

Ressler exits the plane then, leaving Red with a file on the current Skinner, a man named Graham Anderson. One of the shamans tells Red, “I like him. He has a good soul.” Red replies, “I believe he does. I’m less certain about mine.”

With that, I hand it over to you. What did you think of The Blacklist‘s return? Grade it in our poll below, then elaborate on your choice in the comments!