With such small tribes, there’s not much room to hide, especially when you attend four of the season’s six Tribal Councils thus far. Unfortunately for Survivor‘s Ua tribe, that meant losing yet another member Wednesday, as “the closer” Shan once again cut an ally who relied a little too much on their supposed connection and personal relationship. (Read a full recap of Episode 5 here.)

“I thought Shan felt the same way about me,” the ousted Genie Chen tells TVLine. “Obviously, that was a complete miscalculation.”

Below, Chen breaks down the madness behind the Beware advantage, Shan’s deceitful gameplay and how a trip to the bathroom possibly changed the course of the entire season.

TVLINE | What was your reasoning for telling Shan and Ricard about the Beware advantage you found?
GENIE CHEN | I was still so team-focused, and also, it was in a very obvious place. It was right before the water well. I couldn’t move it and hide it somewhere else. That was part of the [rules]. So I thought I would rather know who has it if they were to take it right in front of me. Whoever got that Beware advantage would lose their vote, and at least I would have a little bit more power because I would still have mine. Plus, I thought that Luvu wouldn’t find their Beware idol because they were sitting pretty. They were undefeated, so why would I think anybody was looking for the idol?

TVLINE | Did you know that Shan had opened the advantage? If not, when did you find that out?
I just friggin’ found out! [Laughs] When we decided to leave it there, I kept to it, but then Shan came up to me and was like, “I’m just going to say the phrase and pretend to turn on its power,” when actually, the power was not turned on because you had to have it in your possession. I thought it was a great plan. Then the people who have it [from the other tribes] would think it had power when it had none. So that’s what I thought the plan was.

TVLINE | It was a smart plan!
It was! It made sense to me too, right? Man, I tell ya, those two… for me to think they wouldn’t work together was completely naïve of me. I’ll admit that. Shan and Ricard worked magic together.

TVLINE | What was your gut feeling when you were heading to Tribal? Did you think Shan was going to vote with you to get Ricard out?
I did. As you can see, I can only play with my heart. If I felt in my heart that you liked me, or if you and I had a connection, there was no way I could vote you out. I thought Shan felt the same way about me. Obviously, that was a complete miscalculation. Shan and I [shared] a lot of tender, affectionate moments that didn’t make it on air. She wasn’t like that with anyone else. She didn’t put her head on peoples’ shoulders, but she did with me. Little things, like putting her arm around me. I would like to think that that was real, and I felt like that was real, so I just didn’t think she’d be able to vote me off.

TVLINE | In hindsight, do you regret not teaming up with JD to get Ricard out in the previous Tribal?
JD said something that was very misleading. He said that I refused to work with him to vote out Ricard. Are you kidding me? I friggin’ wrote “Ricard” at our first Tribal! Of course I was willing to use JD’s extra vote, but he never even brought that up to me. There were times I hinted at him like, “Look, I know you’ve got that extra vote, but I’m assuming you want to keep it until the merge?” and he was like, “Yeah, exactly.” So I knew he was not going to play it for me. At that moment, I knew he had to gun for me and I had to gun for him.

Shan did tell me, “Hey Genie, I’m gonna try to get his extra vote.” I was actually going to take that information and tell JD about Shan’s plan, because that was proof we needed to use it together to vote one of them out. But I went to the bathroom, and 10 minutes later, Shan was like, “I got the extra vote,” so I didn’t even have that plan [as an option]! The only thing I could do was to gun for him.

TVLINE | Ricard made a really cold comment about you, calling you “a spare tire that we’re about to put on the side of the road.” Was that hurtful?
He had been making snarky remarks like that about everybody, so I didn’t take it personally. Although if Shan said that, I think I might have gotten my feelings hurt a bit. I actually kind of laughed, imagining myself as one of those tires you see and think, “Gee, I wonder what the story is behind that?” 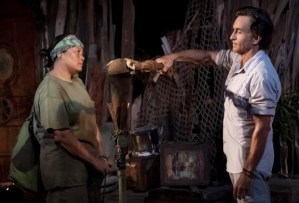 TVLINE | Let’s rewind to the Tribal where Brad was voted out. You seemed to lose your cool after that vote, and rightly so! Can you walk me through the emotion you were feeling then?
I was completely deflated. I shrank 10 inches after he left. He was the only person I felt completely safe with. It was hard to lose him. I was fuming! I was like, “OK Genie, calm down. This is how you get into trouble. When people are on the wrong side of the blindside, they get voted out next because they can’t forgive people.” I was so pissed, and they could feel the energy, but then I tripped over that damn tree stump in the middle of our camp, and I screamed the F word, and all the emotions came flooding out.

It was so much worse than you guys saw! I was saying some really petty things, and that’s not me. People I’ve known for years haven’t even seen me angry before, and now the whole world sees petty, angry Genie. I told them, “You deal with the f–king fire tonight, I’m not doing it!” And while the three of them were fanning frantically, I was talking mad s–t, like “Don’t you wish Brad was here? He was the best at the fire, wasn’t he?” Then Ricard chimes in with a snarky comment like, “Well, that’s not very team-oriented…” and I turned around and was like, “Is it because I won’t make you any more f–king papaya salad?” I was saying horrible things! After that blowup, Shan put me straight again by saying, “Hey, you didn’t know this about Brad and his nighttime tricks, so you weren’t even his number one.” That was the moment I was like, “Oh my gosh, I need to get it together,” because I’m on the bottom and need to charm my way back into the good graces of these people so I’m not the next one voted out. I quickly cooled off after that.

TVLINE | Lastly, what didn’t make the edit that you wish was shown?
I had caught three fish with the Hawaiian sling. Of course, I was catching fish while they were scheming to get the Beware idol and putting the fake idol in there.

TVLINE | Aww!
I know, right!? I was providing fish for them while they were totally hosing me the whole time. It would’ve been cool to show that, but instead they showed Sydney getting nine fish, and let’s face it, she looked much better diving into the ocean than maybe I did. [Laughs] I get it. No hard feelings there, Survivor!