It’s about time we saw a little dissention between Survivor‘s power couple Shan and Ricard.

Once again, all eyes were on Ua, as the tribe’s Beware advantage had to be re-claimed, causing both an advantage shuffle, and later, a disagreement between the tribe’s master strategists. But before any of these potential idols could be activated, Luvu had to get its act together and get to jungle hunting. Does Deshawn still want to slit Erica’s throat? Is Xander still in hot water? Did Ricard and Shan try to take each other out? Read on for a full recap of Episode 5.

UA | Genie tells us how good it feels to be on the right side of a blindside, and says she was reassured she was not on the bottom of the tribe. (Uh, HELLO, there are only three of you left!) She then finds the re-“hidden” (in quotes, because let’s be serious) Beware advantage, and immediately runs to tell Shan and Ricard! (Can anyone on this season keep his or her dang mouth shut??)

Shan convinces the tribe to leave the advantage behind, for fear of losing their vote, but really, she just doesn’t want Genie to open it. (Did this remind you of the time Marcus from Gabon convinced an entire tribe to throw an idol into the ocean?) However, in the very next scene, she wants that potential idol goodness all to herself. She opens the bundle to snag it, but re-wraps it up to keep it hidden from Genie. (Insert Shan’s sneaky-sneaky theme music here.) With Shan officially losing her vote, she hands her extra vote over to Ricard. Then, they tell Genie they’re going to say the secret phrase anyway just to sniff out whether Luvu has found their piece of the advantage. Devious, smart and savage. Love her or loathe her, Shan is straight up killing it this season. 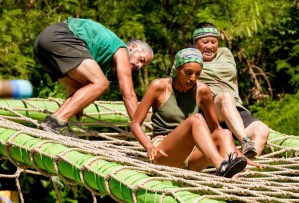 IMMUNITY IS BACK UP FOR GRABS | As expected, Shan and Xander talk about how delirious they’ve gotten out in the elements, giving them another in to say their secret phrases. All of a sudden, Naseer interrupts Jeff to say that he’s as confused as a goat on AstroTurf, and that’s when I gasped out loud and nearly leapt off of my couch.

The episode flashes back one day prior, showing us exactly where and how Naseer found the third part of the advantage. He tells us that before he left for the show, his daughter made a fake idol and would hide it around their backyard for him to find. (ADORABLE.) Naseer’s excitement leaps off the screen, and honestly, the way this was edited makes me just as excited. While the phrases may have been getting repetitive week to week, the presentation here made it feel fresh and surprising. And the best part, ladies and gentlemen: Three idols have just entered the game. It’s about to get wild.

In the challenge, players must go up and over a net ramp, release a key and unlock a machete that will help them retrieve sand bags. Then, they have to fire away at two targets to win immunity and a giant tarp. Yase and Luvu take the cake, with Yase choosing Shan and Liana to go on the advantage journey.

ADVANTAGE TREK | Shan and Liana immediately swap secrets, and as two women of color, they promise to watch each other’s backs. It’s here where we learn Shan’s mom passed away following a rough battle with addiction. Shan ended up in foster care, where she got wrapped up in a gang and didn’t want to live anymore. She dealt with the pain of her experiences by finding her faith and becoming a pastor. Luckily, she reconnected with her mom five years before her death, but it’s all clearly still very painful for her. As she shares her story with Liana, both women shed a river of tears.

For their tough decision, Liana decides to risk her vote, while Shan says she’ll protect hers, ultimately giving Liana the Knowledge is Power advantage. At Liana’s next Tribal, she can ask one person one question: “Do you have an idol?” or “Do you have an advantage?” If that person says yes, he or she must fork it over to Liana. And since she knows Xander has the Mario Party equivalent of a kajillion items, this one’s pretty much a no brainer.

STRATEGY | Ricard plants a story to Genie, throwing Shan under the bus. In reality, he and Shan can easily vote out Genie, and he doesn’t need to work this much overtime. Genie, meanwhile, thinks she and Shan are voting out Ricard.

Genie tells Shan that Ricard is coming after her, so Shan does what she does best: tells Ricard he must bend to her will in order to earn her trust. She pulls the same BS she pulled on JD last week… which Ricard calls out. He refuses to give her back the extra vote advantage when she asks for it, saying that if he does, he has no insurance that she won’t vote him out. (And he is RIGHT!) He tells her he’ll give it back tomorrow, but Shan is having a tough time with this whole not-getting-her-way-all-of-the-time thing. (As if!) Shan tells us she can easily vote him out, but she has to decide: Does she move ahead with the master strategist (Ricard) or the loyalist she can trust 100 percent (Genie)?

THE TRIBE HAS SPOKEN | Ricard tells Jeff that he’s trying to decide between “the closer,” aka the one who makes his plans happen (Shan), and someone who is extremely loyal (Genie). Genie says Shan is the one in the power position, but Shan knows that the other two spent a lot of time together this afternoon while she was off gallivanting for advantages.

They vote. Jeff tallies. No advantages or idols are played, and Genie is sent packing 2-1. Obvious outcome? Well, yeah. But next week all bets are off. As shown in the previews, it’s time to #DropYourBuffs!

Did Genie ever have a chance in hell? Any early predictions for next week’s tribe swap? Drop ’em in the Comments!