The bad news: The Titans have quite a fight ahead of them, in this Thursday’s Season 3 finale. The good news: As least some sort of future awaits them, since the HBO Max superhero team-up series was just renewed for Season 4.

Though several months had passed between filming the Season 3 finale and him being told about the renewal, series lead Brenton Thwaites says he “had a pretty good feeling” the Titans would fight another day.

“The feedback from HBO Max and Warner Brothers and the producers was very positive, but obviously we had to wait for that feedback from the people watching the show,” the Aussie actor explains. “We all felt pretty good about renewal, but it’s a wild world out there, man. We had to wait and see if the COVID-ness of it all would raise the question of whether a Season 4 was worth it — and it turns out it is.” 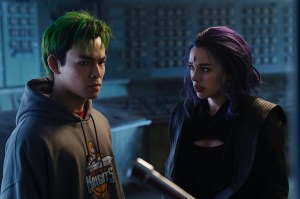 Heading into the finale, as Jonathan Crane/Scarecrow (played by Vincent Kartheiser) prepares to enact his grand plan (and from within Wayne Manor, no less!), the Titans are spread out. And they will pretty much stay that way so that certain team members can best utilize their particular sets of skills to thwart Crane and his corrupt GCPD minions in unique ways.

In the past, “we’ve done fight scenes together where we’re all needed in battle, but this was an attempt to change it up a bit,” Thwaites says. “There could be an option for a big, grandiose fight where Crane has a bunch of his cronies trying to kill us, but  we’ve gone down that path before. It’s nice to have more of a segregated approach to defeating [the Big Bad]. Also, it explains the grandeur of the episode, that it’s all of Gotham that we’re trying to save. We need people all over the city to put out separate fires.” 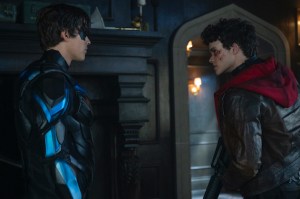 Dick/Nightwing finds himself working alongside, at least to start, Jason Todd (Curran Walters), who famously (if not entirely voluntarily) bailed on the team to adopt the Red Hood mantle and ally with Crane. But can Dick trust Jason as far as he can throw him?

“Well, he can throw him pretty far. He’s a light dude,” Thwaites answers with a laugh. “At least, I try in the finale.”

Thwaites says that Jason’s arc this season forced the writers to ask themselves: “Is this a redemption story? Is this about forgiveness, letting Jason back into the circle? But at the end of the day, to me it felt like something else. It didn’t sit as a forgiveness story, because he’s murdered our friend [Hank/Hawk] essentially, so he forever will be that person to us. However, he kind of comes to the table when we need him the most.” 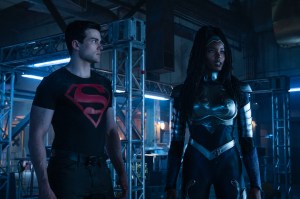 Elsewhere, Connor/Superboy (Joshua Orpin) just committed one of the biggest dating don’ts by blowing up his girlfriend Blackfire’s (Damaris Lewis) spaceship! “I did that when I was 21, man — I met a girl and I blew up her spaceship, and never saw her again,” Thwaites jokes. But assessing the plot twist more seriously, he notes that Connor “is a character that I love seeing come to life, because he’s constantly struggling with the two devils on his shoulder saying do this, do that. We’ve seen him be this benevolent team player, so it’s really good to see the other side and get excited when that darkness comes out.”

As the finale builds to its climax, Thwaites anticipates fans will “feel excited to see the Titans cooking with gas and really collaborating, working towards essentially the recapturing of Gotham and saving the people of Gotham.”

And yet the team that eventually rides off into the proverbial sunset might not have the same headcount as the team that went into this final fight.

“There will be some goodbyes at the end,” Thwaites teases.