Medical Examiner Melinda Warner said it best: “Once an SVU detective, always an SVU detective.” So it’s not all that surprising when former cop Nick Amaro finds his way back to Capt. Benson’s precinct in Law & Order: SVU‘s landmark 500th episode, which airs Thursday (NBC, 9/8c).

More surprising, says Danny Pino, is how little had changed since he left the procedural six years ago, at the end of Season 16.

“It’s amazing how much felt the same,” he tells TVLine. “It’s saying a lot to walk onto a set that has been working at such a high level for so long and to feel that same enthusiasm and commitment to the storytelling.” He credits Mariska Hargitay, who has been a series regular for all 23 seasons, with setting the tone. “That all really flows from Mariska, who is so incredibly connected and energized and committed to telling these stories still.”

In order not to spoil you, we’re not going to delve deep into exactly what Pino does during his time on camera in the big ep. (The official description: “Amaro brings a figure from Benson’s past back into her life.” As previously reported, Aidan Quinn (Elementary) plays Burton Lowe, the aforementioned acquaintance of Olivia’s.) But rest assured, Amaro’s not back for a purely social call. “That same drive, that same fire that Amaro had at SVU is still present,” Pino says. “It’s just now channeled in a different direction.”

Read on for more of Pino’s preview (and make sure to visit TVLine after the episode on Thursday for all the bits we couldn’t reveal prior to air).

TVLINE | How easy was it to slip back into being Amaro?
It hits pretty quickly. I mean, I happened to have the same dressing room that I had right before I left, and so that dropped me in pretty quickly. The physicality of the space is also very similar. I mean, the set has changed a little bit, but the interrogation rooms are still the interrogation rooms… Benson’s office is still there, and the squad room is still relatively the same. It felt very familiar.

A lot of the crew —this incredibly stalwart, hardworking, talented crew — is still the same… You get so caught up in trying to catch up on how people are doing and what they’ve been through, especially through COVID, that there’s an immediate connection to it all. 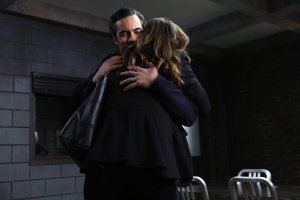 TVLINE | Without spoiling anything, there is a tense Amaro-Benson scene in the episode. What was it like to jump back into that particular shade of Benson and Amaro’s interactions over the years? It’s very fertile territory for both of them.
[Laughs] He was never scared of speaking truth to power. And in that situation, in that hierarchy, Benson is certainly the powerful one. She is the one who pulls the strings. Amaro is coming to her to beg, to ask, to plead to reopen this case, right. And she’s the one who really has the strength.

And then when you couple that with his overwhelming respect and love for Benson, to see that maybe she has a blind spot, and potentially because, you know, they’re not working directly with each other, it’s easier for him to say that than it would be for Rollins, you know, or for Tutuola… And sometimes, it’s your really good friends, it’s your maybe closest friends who…it’s their responsibility to put all of that trust on the line to reveal something to a loved one, a dear friend, and maybe cause an uncomfortable situation. And I think Amaro walks out of that room not knowing where that relationship is at that point.

TVLINE | Have you had any conversations with the show’s Powers That Be about coming back beyond the 500th episode?
I have not. We have not had real conversations about it… I think that that is something that is probably better answered by [showrunner] Warren Leight. [Laughs]