For ultra-sophisticated former Manhattanite Stacey McGill, the third episode of The Baby-Sitters Club‘s second season is a double nightmare.

Not only does Stacey’s diabetes rage out of control and make her feel terrible, it does so as she’s speaking at a charity fashion show about having her diabetes under control — and all of her friends are there to witness it.

TVLine spoke to Lethal Weapon alum Shay Rudolph, who plays Stacey in the Netflix series based on Ann M. Martin’s books, about what the show’s sophomore run teaches Stacey about herself, her disease and her beloved fellow ‘sitters.

TVLINE | I know you’ve spoken about the research you’ve done into Type I Diabetes. But how Method are you about it? Do you wear her insulin pump even when we’re not seeing it?
[Laughs] I am not much of a Method actor, because Stacey and I are pretty similar personality-wise… As far as wearing the pump and everything, no, because the Props Department has to take it back and make sure that it doesn’t get lost or anything, because we only have one of them. 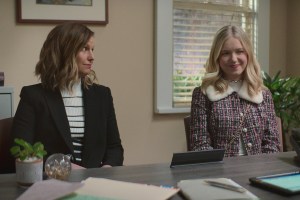 TVLINE | In Episode 3, when Stacey feels like she has control over her diabetes, it seems to give her a big boost. But when she loses that control it really guts her. Can you talk a bit about what we learn about her personality that we didn’t know before?
I think you kind of nailed it there with the control thing. Stacey has a lot of pressure to be this perfect girl who has things all together. I mean, you know, it’s like with her fashion and just with her lifestyle in general, coming from New York and all the attention she gets from boys… She just constantly feels this pressure, and it might not even be an external pressure of everybody’s thinking she’s perfect and thinking she has to be perfect. A lot of the time it’s an internal pressure for her. She feels like she just has to control all these things and has to have everything down in order to be able to relax, which might be true sometimes. I know I feel that way sometimes. I have to get everything done, and then I can relax.

But in this season we really kind of see her take that to the extreme of feeling like she can conquer it all, and she can control it all — and then realizing that sometimes it might be a little too much to do all on your own, and sometimes you need to ask for that help from the people you trust, like these amazing girls that she’s friends with. I think that is one of the most important messages you can give to young girls at this time: that it’s OK to ask for help, and it’s OK to lean on the people that you love to help you get through certain things that might be really tough to deal with on your own. 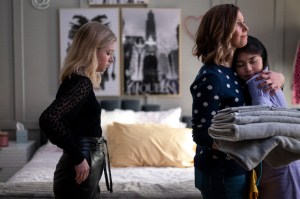 TVLINE | Which leads nicely into my next question: I’ve always liked the Stacey-Claudia relationship, but it seemed to deepen a little bit after Mimi’s death. I’m wondering how you and Momona Tamada approached that.
We didn’t really even have to have too many conversations because Mo and I just have this connection where it’s like we don’t have to say anything. We just know. I think that really translates into how we portray Claudia and Stacey, because we have such a tight friendship where it’s like we know what each other is saying just by the look in our eyes… When we were filming that episode, it was really emotionally hard for both of us because, for me, any time I see somebody I care about so much get really sad, I’m a complete empath, so I feel those emotions, too. [Even though I was] acting, I was still having to sit there and see Mo get really emotional about these things, and it got…it really affected me, too, so I feel like we didn’t really need to talk about it or discuss anything. It was kind of just this unspoken knowingness of how we were going to be emotionally invested in these things, and I really hope that it comes across because it felt so raw and real while we were filming.

TVLINE | There are so many cultural references in the scripts — have there been any that you’ve needed to look up or ask about?
There was one, actually. I think it happens in the first episode where we’re doing all these surveys, and Stacey says something. She makes the reference to a character from Sex and the City, and I was talking to my mom about that, and I was like, “Oh, I don’t think I know what this is.” So then I had to ask the director, and we just had this chat about it. [Laughs] Yes, there are some past pop culture references that we don’t get.