A girl group from the 1990s gets back together after decades apart, and no, we’re not trying to rope you into watching Girls5Eva (though you should): This is the premise of ABC’s new music drama Queens.

In a moment, we’ll want to know what you thought of the series, which stars chart-toppers Eve and Brandy, as well as Naturi Naughton (Power) and Nadine Velazquez (The League). But first, here’s a quick recap of Tuesday’s premiere, titled “1999.”

A helicopter drops a bikini-clad woman wearing a gold necklace that reads “Nasty Bitch” into a setting full of oiled and shirtless men, Champagne bottles and pyrotechnics. As the woman begins rapping, we realize that we’re watching a music video. A moment or two after, though, we jump to 20 years later, and that same woman from the video is now a mother of five who’s braiding her daughter’s hair.

The former rap star is Brianna (played by Eve). Back in the day, she was known as “Professor Sex.” But now, she’s more concerned with keeping her family running smoothly, especially since her husband (Survivor’s Remorse‘s RonReaco Lee) is having migraines that cut into his ability to work and parent. While she’s out shopping one day, she buys lingerie in an attempt to entice her hubby… and then comes home to find him sleeping with a younger woman in their bed. As he apologizes, we learn this is an ongoing affair. “I gave up everything for you!” an infuriated Brianna shouts at him.

Elsewhere, a woman named Jill (played by Naughton) is ovulating but lies to her husband that she’s not. Later that night, we find out why: She’s secretly gay and in love with her friend, Tina (Felisha Terrell, Teen Wolf), but Jill is conflicted. “I am married. I’m Catholic. I’m also the daughter of a deacon who literally prayed over kids he thought might be gay,” she tells Tina. We later learn that Jill also was a member of Brianna’s old group, Nasty Bitches — she was known as Da Thrill — and that she had a cocaine problem during their heyday.

Another member of the group is Naomi (played by Brandy), who is still trying to make a go of a music career, only this time as a singer/songwriter. She’s got a teen daughter named JoJo whom she doesn’t see often; during a tense interaction on the girl’s birthday, we find out that JoJo isn’t sure of who her father is. And rounding out the Nasty Bitches is Valeria aka “Butter Pecan “(played by Velazquez), who’s achieved a certain level of fame as a network on-air personality. 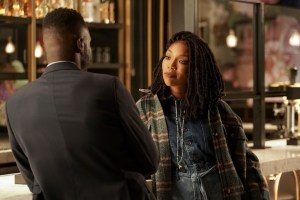 The Nasty Bitches’ former manager Eric (played by Taylor Selé, P-Valley) wants them to get back together for one night, to perform alongside one of his young artists named Lil Muffin (played by Pepi Sonuga, Famous in Love) at the BET Awards. Initially, the ladies can’t agree on whether or not to do it. But after Valeria is caught poisoning her co-host in order to gain greater fame for herself, and winds up fired from her day job, she comes around. She also apologizes to Naomi, with whom she has longstanding beef: Both of them were into Eric, but he only was in a relationship with Valeria. (What Valeria doesn’t know? Naomi and Eric slept together the night before Valeria changed her mind about the reunion.) 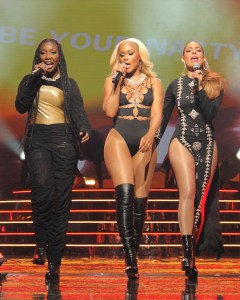 A lot happens in the lead-up to the BET Awards. We learn that Naomi knows who her daughter’s father is, but she never told the man in question that she’d gotten pregnant. Lil Muffin overdoses on cocaine and only survives because Jill & Co. rush her to the hospital. Jill comes out to her friends. Brianna’s husband reveals that his headaches are caused by cancer in his brain. And the four women decide, as Naomi says, that “We don’t need a crowd. We don’t need a stage. We need each other.”

The night of the awards, Lil Muffin is so grateful for the women’s help that she gives them the full spotlight. “I used to be a nasty bitch! Tonight I’m a queen!” Brianna tells the crowd as the women kick it into high gear. During her verse, Jill comes out (and, at home, Tina sees and is so happy). The performance is a hit.

Then we jump to six months later. Lil Muffin went to rehab. And that’s a very good thing, because she and the Queens are about to head out on a world tour.