There’s a new name on top of the Waystar Royco totem pole… and she’s not even a Roy.

Sunday’s Season 3 premiere of Succession (read our full recap here) saw the Roy family in chaos after Kendall effectively declared war against his father Logan by detailing his many corporate crimes in a press conference. With Logan’s name suddenly radioactive, Waystar needed a new CEO — and after considering his children Shiv and Roman, Logan decided to elevate the company’s general counsel Gerri to the top spot. (With Logan still steering the ship from the shadows, of course.) It may have been a surprising choice to some, but for Brian Cox, who plays Logan, it was the only choice. 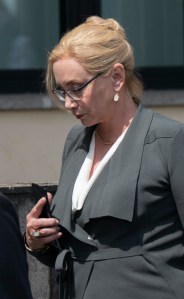 “It’s a no-brainer to make her acting CEO,” Cox tells TVLine. “She’s the sort of ethical face of Waystar Royco… and [Logan] needs that ethical face, and that’s why she’s there.” Logan actually trusts Gerri more than he does his own children, Cox adds: “She has her moments of wobble, but she’s always been fairly straight.”

Shiv is “frustrated at the beginning” about not getting the gig, Sarah Snook admits, but she soon sees the upside of staying out of the line of fire: “Not being the face of an absolute s–t storm is a good thing in this moment.”

Roman is “definitely jealous” of Gerri’s new position, Kieran Culkin notes, “but I think in a way, it’s sort of the best case scenario for him.” Being named CEO while his father is still actually running things would be “almost too much pressure,” he thinks. “It’s like, you’re in charge, but you’re not in charge. I don’t think Roman would be too good at that.” If Roman could call the shots, though, “I do think he actually has the tools for it. I think he could handle it really well… If you gave him a few steps to climb up the ladder, he’s probably going to be s–tty at those steps, but put him in charge, and I think he knows what to do.”

As for the woman in charge herself, J. Smith-Cameron thinks Gerri can handle the slings and arrows that come with the position: “In a way, she knows she’s the most capable of steering them out of trouble… Yes, it’s dangerous, it’s a vulnerable position to be in, but I think she’s also like, ‘Oh for Christ’s sake, I’ll do it. I’ll be better at this. I’ll handle this, smartly.'” And she’s not going to apologize once she’s in the big chair, either: “I think she’s like, ‘Look, I’ve been asked to do this impossible job. I’m clearly more suited to it than anyone else.'” But what about those misbehaving Roys? “I think she’d like to knock their heads together.”