DC’s Stargirl has been wading in dark themes for much of Season 2, but in this week’s episode the superhero team-up series heads to a truly dark place — the Shadowlands, to which Cindy and now Courtney (among others) were dispatched by Eclipso.

TVLine invited Cindy Berman aka Shiv’s portrayer, Meg DeLacy, to revisit the wild cafeteria fight that ultimately led to Cindy’s own date with “black tar goo” and then preview the unlikely alliance that might save both Cindy and Courtney (played by Brec Bassinger) in this Tuesday’s decidedly moody, black-and-white episode (airing at 8/7c on The CW).

TVLINE | We last saw Cindy in Episode 6, at the end of that brutal cafeteria fight. When you first read that script and saw how it ended, did you have questions about your status with the show?
Oh, yeah. Because so many people died in Season 1, there was all this talk about Cindy and “Oh, it’s going to seem like she’s dead but she’s really not.” But when I first read the script, I was like, “[Showrunner] Geoff [Johns], what’s going on?” He was like, “Don’t worry, there’s a whole arc planned for your character. But I really want people to think that Cindy is dead because of the power in that, and the surprise for the audience once they do end up seeing Episode 11.” I was gone for four episodes, but it was all worth the wait.

TVLINE | The fans were sad, man! Even though she’s a bad guy….
They were so sad! I know, I know. They were so sad. It was the first time that Cindy ever really was terrified.

TVLINE | Well, I was curious: How did that Episode 6 script describe the moment? Like, “Cindy sinks down into…” what?
It was like, “Cindy slowly gets sucked into this black tar goo, and Courtney’s coming to save her, latching onto her hands and shoulders. Cindy has no idea what’s going on, and for the first time we see Cindy purely terrified — in her faces and in her eyes and with her scream.” It was kind of like, “How are they going to do that? What is this ‘tar goo’? It was hard to imagine, but once the stunt team came in and showed us a previs[ualization] of what it was going to look like, I was like, “OK, this makes sense.” Because on paper it does sound kind of crazy! 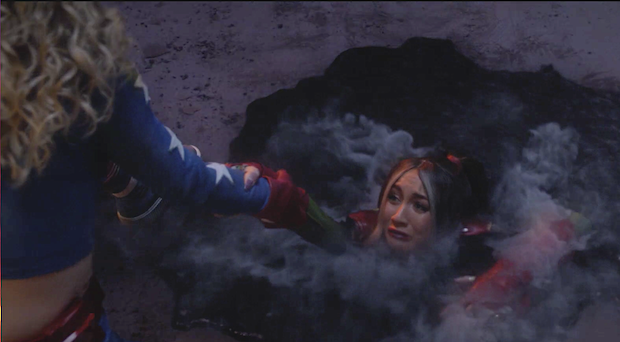 TVLINE | Yvette [Monreal, Yolanda] told me that filming that fight sequence was quite a thing, because it was so involved and action-packed.
It was so involved. It was also one of the first times that the whole cast plus some of the recurs were all together. We were in this cafeteria for about two weeks, and a majority of the episode is stunts, and they take a long time — as they should…. It felt like camp! Walter Garcia, our stunt coordinator, is absolutely incredible and he incorporated every move and character in different ways through the whole sequence in general.

Our supersuits were tight at the beginning of the season, because they were new, but by the end of Episode 6 there were completely broken in and body-conforming. [Laughs] Oh, and it was really dusty! We had dust and debris and air [blowing] constantly, so when The Shade shows up and we can’t see and we’re like, “What’s going on?,” that was real. These were real reactions. 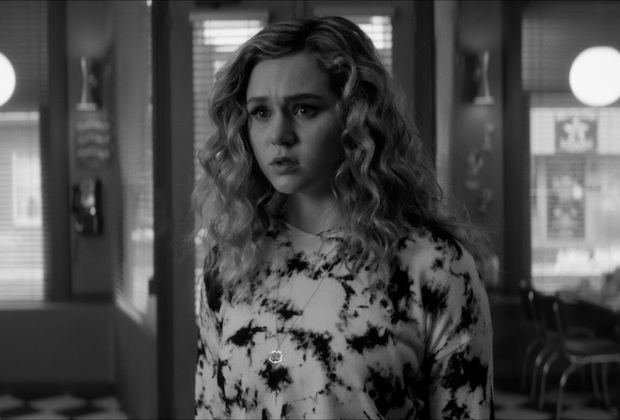 TVLINE | How would you then compare this week’s episode?
It’s going to be less action-packed, it’s going to be more noir kind of drama. This is our first time having a black-and-white episode, which brings a cool dynamic to the show. It’s going to introduce a whole other side to what this show can bring, in the acting sense and as far as aesthetic and design. The Shadowlands is a pretty scary place, and kind of spooky. The show itself has been a bit more scary in general, but this brings another level to that, because it’s a world that no one really knows about. Cindy has been stuck in it for who knows how long actually or how long it feels like, and it’s tormenting her. It’s our insecurities, it’s our demons being introduced to us every single day.

TVLINE | What is Cindy’s state of mind when we see her?
Well, she definitely feels stuck. She’s been living the same day over and over again — it’s a little Groundhog Day-esque — dealing with her father showing up all the time and her killing him again and again. She’s tired of it all. She’s over it. She hasn’t allowed Eclipso to really get into her head, where her true struggle is the death of her mom and how she was responsible for that. So in this episode, Courtney and Cindy face [their demons] together, side by side. Two brains are better than one!

TVLINE | It sounds like this episode might, among other things, finesse the “frenemies” dynamic between the two of you.
It absolutely will. I mean, I think that Cindy has always respected Courtney because she came in and called the shots when there was a whole plan with the ISA and what they were going to do. Cindy sees Courtney as threat but also recognizes the potential in her as a leader. It will be refreshing to see these two have to put aside their differences and their history and work together, because it is a matter of life and death. It’s a cool dynamic I think the audience will really enjoy.