It’s not easy being a nebbish nerd girl when talks of Superman are in the air, as shown in a new clip for The CW’s midseason superhero drama Naomi.

Warner Bros. TV unveiled the first look on Saturday at its virtual DC FanDome event. Written and exec-produced by Ava DuVernay (When They See Us) and Jill Blankenship (Arrow), the DC comic adaptation stars The Equalizer‘s Kaci Walfall in the titular role.

Naomi centers on a cool, confident Black teenager with braids as she chases her hidden and unexpected destiny. As Naomi “journeys to the heights of the multiverse” in search of the truth, what she learns challenges all the things we believe about our heroes. The adopted daughter of doting parents, Naomi is popular with all the kids in her military town and unafraid to embrace her “AP-student, comic book-loving” ways. 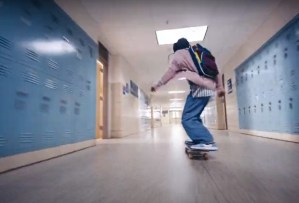 The logline for Naomi also makes mention of a supernatural event that shakes up the teen and her hometown — and which perhaps is hinted at in the clip above, in which the title character is thrown for a bit of a loop  after she bolts out of school and skateboards toward super excitement.

Are you excited about Naomi and what DuVernay and Walfall will bring to the comic-book adaptation? Watch the teaser above and drop your thoughts in the comments.