Chucky may be terrorizing a brand new generation of clueless teens on TV, but he’s also freaking them out when the cameras stop rolling.

“It was so creepy,” Alyvia Alyn Lind (who plays head bully Lexy Cross) tells TVLine. “They had a room just for doll parts, and there’d be like 10 different Chuckys sitting there, just staring at you, and you’d be like, ‘Oh that’s… I can’t!'”

Co-star Bjorgvin Arnarso (who plays podcaster Devon Evans) co-signs Lind’s eerie on-set feelings: “I think it was creepier when they weren’t using him. I was walking around set, and I’d see Chucky just looking at me. I didn’t know if he was going to start blinking or moving, and I was just like ugh.”

In Syfy/USA Network’s Chucky series (which premiered Oct. 12 and airs Tuesday nights at 10/9c — read a recap here), a young teen named Jake Wheeler (Zackary Arthur) purchases the Good Guy doll at a neighbor’s tag sale, completely unaware of the lore of serial killer Charles Lee Ray (or, ya know, that the doll will probably come alive and off him in his sleep). As expected, it doesn’t take long for ol’ Chuck to bring on the scares, as he brandishes razor-sharp weapons and even sharper one-liners.

“When it comes to life, it feels so real,” Lind adds. “Everything is right in front of you, and it is terrifying, but also incredibly cool.” 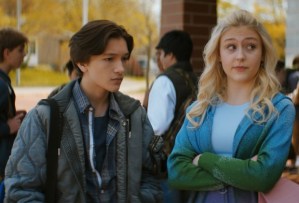 The teen actors of the sequel series range from 14-16 years of age, but it only took a few binge-watches post-hiring to get them up to snuff on Chucky’s dastardly, blood red-hued history. But along with catching up on Charles Lee Ray’s life came the added pressure of coming face-to-face with the series’ long legacy, including the expectations of fans who would soon be pointing all eyes at them.

“I don’t think I realized the weight of the legacy until about halfway through filming. Then I realized how humungous this franchise is and how passionate the fans are,” Teo Briones (who plays Jake’s cousin, Junior) says. “It definitely made me a little more nervous, and scared that I wasn’t doing a good job. But it also made me super excited that this is a TV format instead of movies. We get to say a lot more with our characters and the story.”

Arthur echoes Briones’ sentiment. “[It was] definitely a lot of pressure, especially because it is such a big thing,” he says. “You could ask anyone on the street if they know Chucky the killer doll, and 99 percent of the time they’re going to say yes. So, it was a little nerve-wracking, especially the first day on set, but as we carried on, it got easier and easier.”

While dodging the doll both on screen and off presented uniquely terrifying challenges, the cast of up-and-comers is grateful to be included in a franchise that’s followed by swarms of devoted horror fans.

“Finishing the show gave me a really good sense of accomplishment,” Briones adds. “I feel like we’re doing the fans proud. I hope everyone likes it.”