For the past 30-plus years, Chucky has been slicing and dicing his way through cinemas, slinging fresh zingers for every bloody body that dropped. Now the pint-sized red-head with a thirst for carnage is making his small-screen debut, and his latest teenaged victims have no idea what they’re in for.

In Tuesday’s premiere, a bullied young teen named Jake Wheeler (Zachary Arthur) becomes Chucky’s new BFF, and though life has been hard on the boy, he probably didn’t think it could get any worse. Much worse. Although none of the films’ returning players have popped up just yet (there was a questionable phone call from someone who may or may not have been OG protagonist Andy Barclay), the first episode teed up a season that’s sure to be as fun as it is twisted.

But let’s not get too far ahead of ourselves. Will Chucky and Jake be “friends ’til the end,” and who didn’t survive the premiere episode? Let’s recap!

Some time in the past, a pitter-patter of tiny footsteps creep up on an unsuspecting woman brushing her hair at a mirror. She turns around and gasps, and we immediately cut to the present, where Chucky sits on a tag sale table awaiting his new victim. Jake, a young gay teen who uses dolls for art projects, buys the doll and walks away, just as his neighbor notices a large butcher knife has been swiped from her knife block. And so it begins!

We learn that the town of Hackensack has had a 25 percent spike in its murder rate in the past year alone. While Devon (Björgvin Arnarson) rattles off facts via his crime podcast, we learn about the Ray family murders of 1965 which left two parents dead and a young 8-year-old boy orphaned. It was a bloodbath that gave birth to one of the most infamous serial killers in history, one you already know pretty darn well if you’ve followed the movies: Charles Lee Ray.

Jake’s blue-collar dad Lucas (Devon Sawa) doesn’t quite understand his obsession with dolls. Dad becomes the bearer of bad news when he tells his son he can’t afford to send him to a pricy art camp. We also learn that Jake’s mom has passed away. Man, things sure are depressing around the Wheeler household. 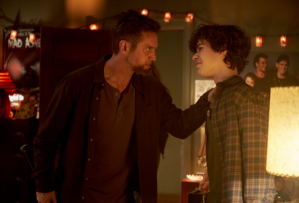 The alcoholic Lucas hits the sauce pretty hard and, in an angry stupor, smashes Jake’s art. (Aw man, I was hoping he wouldn’t turn into a huge D-bag.) Meanwhile, Chucky hides under the bed to escape his wrath.

The next day, Jake brings Chucky to school, where his cousin Junior’s (Teo Briones) nasty girlfriend Lexy (Alyvia Alyn Lind) teases him for being poor when he mentions selling the valuable doll. The bully goes so far as to create a mock GoFundMe page that reads “Fight poverty: Help Jake and Chucky!” We’ve only known her for a few minutes at this point, but can Lexy die first?

Their teacher takes her to task for being entitled and arrogant, but Lexy is a bratty middle schooler who thinks popularity makes her invincible. Plus, her mom is the mayor of the town, which only adds to her snobbery. Unfortunately, Lexy does not become Chucky’s first victim, but he does give her a quite a scare in the classroom when the teacher steps out for a sec.

Later at home, Jake gets a phone call from a prospective Chucky buyer. The mystery caller knows the doll’s name and warns Jake to “be very careful” with him. (Is it OG lil kid Andy on the line?) Jake gets Googling and finds a photo of young Andy with Chucky. The headline reads: “Is This Doll Cursed?”

Jake’s a bit freaked out, but even more so when the doll magically makes its way back home from school. As requested by the ominous caller, Jake checks Chucky’s batteries, and OF COURSE, THERE AREN’T ANY IN THERE BECAUSE HE IS A MONSTER. 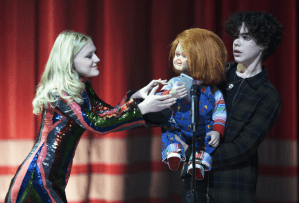 Understandably, his dad is livid. “It doesn’t bother you that everybody thinks you’re f–cking weird?” he shouts. Jake barks back saying that Lucas only cares that they know he’s gay, which causes the old man to punch his son and throw him against the wall. Mr. Wheeler threatens to kill him, to which the boy replies: “It should’ve been you inside that car instead of Mom.” Ouch. On all fronts.

When the power suddenly goes out, the drunkard heads to the basement. When he resets the breakers, the lights come on to reveal Chucky standing right next to him. The doll pukes up some sort of liquid, causing Mr. Wheeler to get electrocuted. After the cops take away the body, Jake goes to stay with his aunt, uncle (also played by Sawa!) and cousin, though Junior does not look happy about it (mostly because he, like his girlfriend, is a huge jerkface).

Jake demands that Chucky talk to him, and Chucky punches him in the face. “Hi, I’m Chucky, and I’m your friend to the end! Heidi-f–kin’-ho!” the doll snarls. (Hello, indeed, original voice actor Brad Dourif!) Jake is flabbergasted and can’t believe his eyes. Chucky tells him his dad got what he deserved, and you know what? We’re gonna side with the psychotic doll on this one. “Now… let’s talk about that bitch Lexy,” Chucky says. (Yes, let’s!)

We cut back to the woman from the cold open. Her big shock was caused by her young boy, Charles. It’s 1965 in Hackensack as she puts the boy on her lap and stares into the mirror. Looks like this franchise is finally diving into the boyhood of its infamous serial killer, Charles Lee Ray.

What did you think of Chucky’s small screen debut? Grade the episode below, then fire away in the Comments.