The Flash‘s Barry Allen will get some sort of blast from his and wife Iris’ past, in the form of Rick Cosnett‘s Eddie Thawne.

Cosnett late Wednesday night shared on Instagram a photo of his currently hirsute self (below) with the caption “Special announcement coming tomorrow.” Though the photo location was tagged as Unknown, TVLine recruited our own forensics whiz to deduce with 92 percent certainty that Cosnett is in Vancouver, where The Flash is about to wrap production on the final installment of the five-episode “Armageddon” team-up event that will open Season 8.

3 pm ET UPDATE: TVLine can now double-secret officially confirm that Cosnett will be back… for a singular flashback episode that will air after the season-opening “Armageddon” event. Meaning, all that groovy hair has gone bye-bye. [Sad trombone] 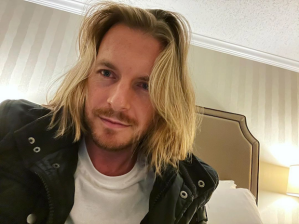 As an original cast member, Cosnett played CCPD Detective Eddie Thawne throughout all of Season 1, until Iris’ onetime fiancé ended his life in the Arrowverse series’ freshman finale (so as to prevent descendant Eobard’s existence). Since then, Cosnett has reprised the role twice — in Season 2’s “Flash Back” (in which Barry travels back in time to consult with Dr. Wells) and Season 3’s “Into the Speed Force” (in which Eddie served as one avatar for the titular Speed Force).

Fan speculation/dream-casting over the years has championed the idea of Cosnett returning as Cobalt Blue, who in DC lore (and under the name Malcolm Thawne) was a long-lost twin brother of Barry’s. Alas, that turned out not to be the case here.