Mia Smoak is looking like her resilient self in a photo that Arrow alum Katherine McNamara shared on the set of The Flash‘s season-opening “Armageddon” event.

McNamara’s BTS photo (shown below) showed her neither in any familiar Green Arrow get-up nor in the eye black that goes with a domino mask, but showed her (pretend!) bruised and was accompanied by the caption, “Back in a #FLASH. #Armageddon here I come.”

Arrow‘s Mia also figures into the action… even though in The Flash‘s timeline, she won’t be her grown-up self for another 19 years or so, right? 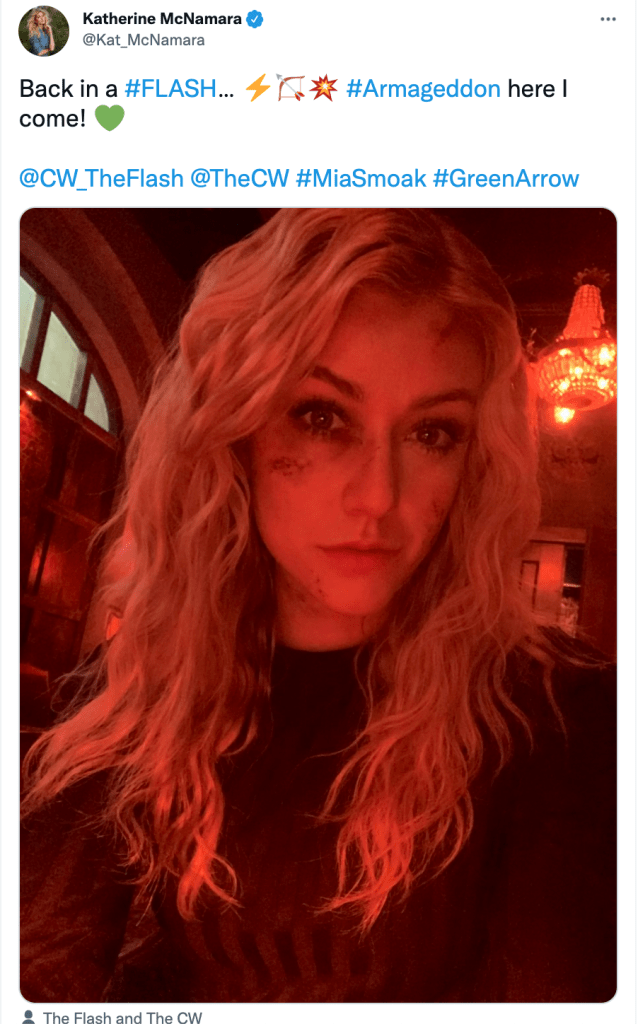 “Well, technically yes, but who knows!” showrunner Eric Wallace told TVLine when we asked about Mia’s presence. “We are dealing with speedsters” who can travel through time, he allowed.

Per the official “Armageddon” logline, “A powerful alien threat arrives on Earth under mysterious circumstances and Barry, Iris and the rest of Team Flash are pushed to their limits in a desperate battle to save the world. But with time running out, and the fate of humanity at stake, Flash and his companions will also need to enlist the help of some old friends if the forces of good are to prevail.”

In addition to the alien threat, which will be led by Defiance alum Tony Curran’s Despero, Tom Cavanagh and Neal McDonough will reprise their respective adversarial roles of Eobard Thawne/Reverse Flash and Damien Darhk.

“It’s going to be a true event for Flash and Arrowverse fans, old and new,” Wallace said in a statement. “Honestly, I can’t wait for audiences to see what we’ve got planned.”