If you didn’t know anything about TikTok before this week’s Law & Order: SVU, you sure do now.
The first half of the latest SVU/Organized Crime crossover dealt with the social media site and a fledgling influencer named Willa, who gets invited to a content house (aka wildly lucrative influencer hive) called The Wheelhouse. By the end of the evening, she posts a video to her feed saying that two members of the house raped her. It comes to Liv’s attention when Noah sees it on TikTok; she and Rollins wind up talking to Willa to see what happened.

She says two of the Wheelhouse members, Tate and Liam, assaulted her in a downstairs bedroom. But she didn’t go to a hospital afterward (therefore no rape kit) and the guys deny it. Willa visits the house again, wearing a hidden camera and with Organized Crime’s Det. Slootmaekers nearby and undercover, to try to get them to admit what they did. But they gain the upper hand when they livestream the encounter, forcing Willa to say that her rape allegations were nothing more than a stunt. 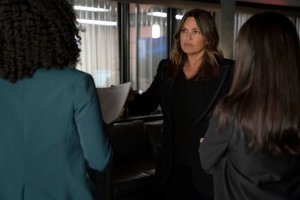 It all seems hopeless until Tate and Liam post another video dunking on Willa and the cops, which is enough for SVU to bring them in. The dudefluencers are going to trial, which causes them to turn their followers against the police and the district attorney’s office — and when the hordes start throwing stuff outside the courthouse, Carisi takes a Slushie to the chest as a result. (Side note: Cherry-dripping, pissed-off Carisi is a fun Carisi.)

Eventually Diggy, another member of The Wheelhouse, starts to feel guilty about what went down at the content site. So he posts a video in which he sticks up for Willa — Rollins discovers it while Carisi is making her dinner, which is irrelevant to the story but which made me so happy — and Diggy becomes a witness for the prosecution. 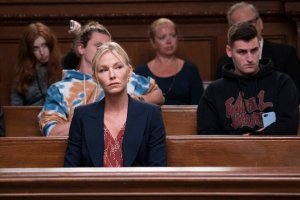 But the jury eventually acquits Tate and Liam of all charges. Boo! But the jury forewoman posts a selfie with the guys that leads Carisi to dig and find out that Liam and Tate were DMing jurors during the trial, offering them membership in The Wheelhouse in exchange for a not guilty verdict. Their lawyer cuts a deal that leads to both of the scumbags getting years in prison. And Diggy invites Willa to join a rebranded Wheelhouse that will be a “survivor squad” made up of people who have been through sexual assault, mental health issues, etc.

Also? Willa has known Carisi and Rollins for five minutes, but even she can tell that there’s something going on between them.

OK, let’s get on to the crossover: If you’ve been watching Organized Crime, you’ll remember that Rita, the waitress Stabler chatted with about The Count of Monte Cristo, has been missing for a while. Thanks to one of Olivia’s contacts, she learns that Albi and the Albanians are running a sex trafficking ring of young girls. Bell and Slootmaekers let Stabler know. (Want to know what happens in the Organized Crime episode that follows? Read the recap here.)