Temperatures rose in Thursday’s Grey’s Anatomy and not just because the episode marked the beginning of Kate Walsh’s return arc as Addison Montgomery, aka Richard’s secret weapon to whip his class of residents into shape. When Grey Sloan’s AC went out, things around the hospital got, as the title promised they would, “Hotter Than Hell.” But did anyone get burned? Read on and find out!

‘YOU MUST BE THE GROUP THAT’S BEEN SCREWING UP THE PROGRAM’ | As the episode began, Amelia revealed to Mer that curing Parkinson’s was one of Link’s lifelong dreams. If only she wasn’t sworn to secrecy about Minnesota. At Grey Sloan, Owen struggled with the idea of giving up on Noah from last week (even though that was what the patient wanted). And the residents all but exploded in excitement upon learning that Addison would be arriving that day. When Cormac welcomed Mer back to Seattle, he did so… with hot coffee during a heatwave? Lucky he’s cute. After Bailey hurried past, Mer admitted to Hayes that she’d yet to tell Miranda or Richard that he’d have to take over the residency program again. Which he was already kinda doing as he sent the youngsters off on grand rounds with Addison. (Ah, and how good was it to have her back in those halls!) 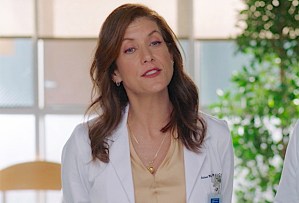 Though Addison was all business, the residents gossiped like crazy about her past with Mer and the husband they’d had in common. But they were soon distracted by their case of the day. Courtesy of Addison, it was a groundbreaker: a uterine transplant for a woman named Tovah who wanted to get pregnant with her late husband’s preserved sperm specimen. Jo tried to kiss up to get in on the case, but Addison just sent her for coffee. Later, Richard was all excited about updating the residency program with Mer… who couldn’t quite bring herself to tell him that he’d be doing so without her. Not yet, anyway. 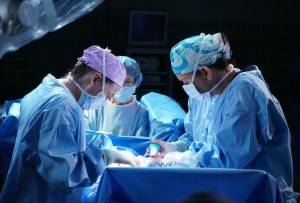 ‘WELL… CRAP’ | Before Tovah was wheeled into surgery, Addison sweetly reassured her patient. Levi, having already impressed Montgomery, was allowed to scrub in, while his peers fielded rapid-fire questions from the gallery. By and by, a strange rumbling was heard throughout the hospital: The AC had died. Richard soon reported to Addison that without AC, the air-filtration system in the hospital was also down. She had to call off the surgery or double her speed. In response, Addison told him to get her someone with hands as skilled as her own. In fact, she said, get her Meredith.

While Mer and Addison worked on Tovah, they playfully teased one another about which of them would win that year’s Catherine Fox Award. (Addison was sure she had it in the bag, what with her uterine transplant and all; but Mer could still take second place.) Once they were done, Mer and Addison shared a laugh at the residents’ fascination with their “tension.” But then Addison broke down in the elevator. She thought coming back to Seattle, she’d be able to feel like Derek was still there… and she didn’t. “Addison, he is here,” Mer assured her, in particular in his children, to whom she’d love to introduce Montgomery. In turn, Addison encouraged Mer to fight for her next big thing. “Richard will understand.” (Awesome scene.) When the residents spotted them getting off the elevator, Helm hilariously remarked, “Grey made her cry… and I’m here for it.” 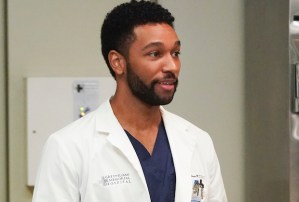 ‘THIS IS NOT A WINDOW UNIT’ | When Winston reported to Reshida that a donor kidney had been found for her, she was beside herself. He was still anxious, though, knowing that this was her last chance. From there, an MIA Maggie’s husband approached Owen to perform the transplant. Sure, Hunt said. When Winston learned that the AC being out meant that Reshida’s surgery couldn’t be performed, Owen leapt into action to save the kidney. His idea? He was going to perform the transplant in Station 19’s aid car. Meanwhile, Link and Teddy took action to try to get the HVAC going. She’d installed a window unit that day and was sure she could handle it. She couldn’t. When Link couldn’t get the AC going, either, he erupted, upset that he loved Amelia and didn’t feel like she even thought about him. (Which she kinda didn’t; she was busy throwing sparks on a call with doc Kai in Minnesota.) 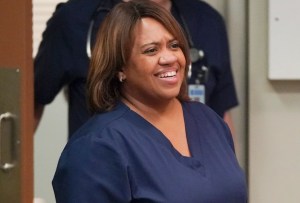 In other developments, a young woman involved in a jet-ski accident (that sent water blasting into her privates) beseeched Bailey and Cormac not to call her parents; they didn’t know that she’d been meeting her Internet boyfriend IRL. When Cormac grumbled to Bailey that teenagers seemed to be losing their minds, she cracked that they didn’t have minds to lose. Despite the surgical shutdown, Bailey still went ahead and operated on the girl’s perforated bowel. Finally, Cormac got the girl’s Web beau to hand over her phone so he could contact her folks. As the hour drew to a close, Addison stood up to Richard on behalf of the overworked residents. But OK, they were also sometimes a little whiny, she admitted. Afterwards, Mer broke it to Richard that she wasn’t moving to Minnesota and would stay on as chief of general surgery… but the residents were all his once again. After telling Reshida that yup, she had a new kidney, Winston led Sara to the coolest place in the whole hospital. No, not that kinda cool: the morgue, where a whole party was going on, courtesy of Bailey’s ambassador of fun, Teddy. 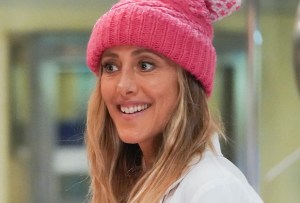 Then, at last, Addison was reunited with her L.A. “sister,” Amelia, who was surprised to learn that they were having dinner at… Mer’s. In his anxiousness to help Noah, Owen went so far as to show up at the guy’s door. “The military doesn’t want to take responsibility” for soldiers like you, said Hunt. But he’d fight for Noah every step of the way. “What do you need from me?” Noah asked. He was in. At Mer’s, Addison almost choked when she saw Bailey. Was she Daddy’s friend? Yes, she said. But he called me Addy. Aww. So, what did you think of Addison’s comeback? Hit the comments with your thoughts.