Not since tech billionaire Walden Schmidt descended upon Two and a Half Men‘s Malibu beach house 10 years ago has a Chuck Lorre sitcom suddenly been infused with so much wealth.

During B Positive‘s Season 2 premiere, Gina discovers that one of her favorite residents at Valley Hills retirement home — Mr. Knudsen, played in Season 1 by The Love Boat‘s Bernie Kopell — has died, and he’s left her a generous nest egg: $48 million. (It’ll be $24 million after taxes, an attorney tells her, which is still enough to induce a sudden orgasm.)

“It felt like a very natural and wonderful way to see how life can turn,” Lorre tells TVLine of Gina’s financial windfall. At the same time, he says, “when you throw money into any situation, it’s disruptive… It can be a problem in and of itself.” 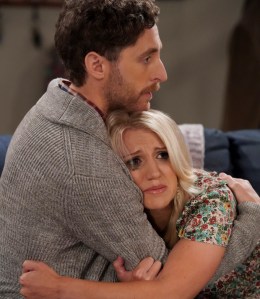 Gina embarks on a shopping spree, but it doesn’t spark joy. If anything, it just makes her sad. It’s why she decides to continue working a minimum-wage job at Valley Hills, even though she doesn’t have to work another day in her life.

“There’s a scene early on where she describes how great she felt, and how enduring that feeling of joy was when she gave a kidney [to Drew],” Lorre says. Her new fortune is “the universe conspiring to reward her.”

Lorre also wanted to explore what would happen if you gave a character like Gina, who has a “naturally giving type of personality,” a large sum of money. Her “life-affirming” qualities, he notes, are not all that dissimilar from one of his former sitcom characters.

“I did one of those characters many, many years ago in Dharma & Greg,” he says, referring to Jenna Elfman’s Dharma. “It’s a wonderful character because, in a way, it’s almost like an alien creature. 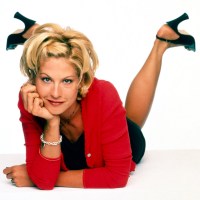 “I would describe Dharma as a martian in a way,” he continues, doubling down on his out-of-this-world comparison. “Her enthusiasm, her joy, her giving nature… it startled people and it rubbed them the wrong way. They didn’t trust her, they didn’t believe her, and they thought something was wrong.”

To be like Dharma or Gina, he says, “is viewed somewhat suspiciously,” as if there are only two options: “It’s either a con, or the person is crazy.

“But what if the person really is a giving, loving, generous, open-minded, open-hearted character?” he posits. “What happens? In B Positive, the windfall of money from an elderly man who she cared for, who she looked out for, who she took time to be with and to talk to, and to try and make his life better,” will in turn change Gina’s life forever. 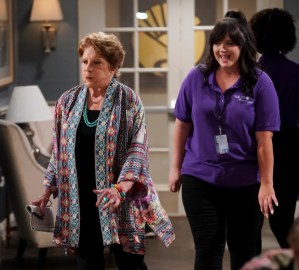 As for what Gina decides to do with the money, it was previously revealed that she will use it to improve the lives of the elderly residents of Valley Hills, which once again houses Linda Lavin’s Norma, as well as five new residents played by Hector Elizondo (Last Man Standing), Jane Seymour (The Kominsky Method), Ben Vereen (The Good Fight), Priscilla Lopez (A Chorus Line) and Jim Beaver (Supernatural) — all of whom will be introduced when the show undergoes a soft reboot in the Oct. 28 episode.

What did you think of B Positive‘s Season 2 premiere? Grade it via the following poll, then drop a comment with your full review.