Warning: The following contains spoilers for Wednesday’s Legends of Tomorrow premiere. Proceed at your own risk!

Legends of Tomorrow is adding another member to its team — and this one’s somebody they’ve been traveling through time with all along.

In Wednesday’s Season 7 premiere, the Legends found themselves trapped in 1925 after a second, mysterious Waverider blew up their time-ship. As Constantine’s protégé, Astra took it upon herself to perform a spell in the hopes of putting the Waverider’s blown-up pieces back together. Her efforts almost worked, but she ended up bleeding from the nose and collapsing just as the reconstructed Waverider started to take shape. After recuperating, Astra shared a heart-to-heart with Spooner, during which she uttered the final word of the spell, unknowingly conjuring the ship’s A.I., Gideon, in flesh-and-blood form. 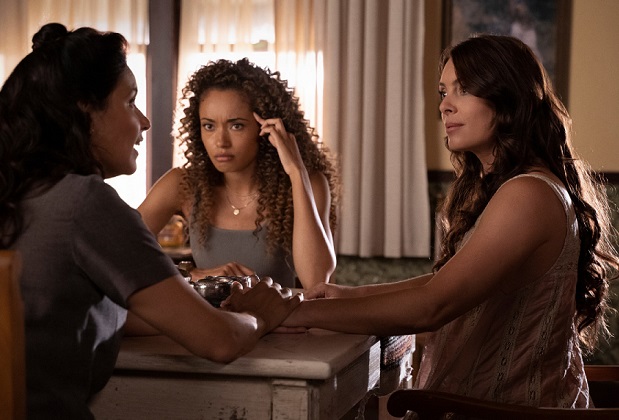 Now that Gideon is an actual person (played by Amy Louise Pemberton, who has voiced the A.I. since the pilot), “she’ll force the Legends to reconsider their treatment of her — not that they’ve been unkind,” executive producer Phil Klemmer tells TVLine. “But they’ve, certainly, taken her for granted and maybe considered her not fully part of the team,” even though she’s been with them since the start.

“Living in this human body is going to be both a joy and a struggle for Gideon,” Klemmer continues. “She was always kind of removed from our team, so she’s happy to be in the fold, but at the same time, now she’s plagued by all of the dissonances that our Legends have. She’s always the one who’s been like, ‘Guys, seriously, stop being so human.’ Humans are inconsistent and emotional and irrational, and now she doesn’t have that distance. Now she’s just one of us, and now she’s having to learn a lifetime’s worth of being human in a crazy crash course.”

Even in her corporeal form, Gideon still “has much of her A.I. intelligence,” Klemmer notes. But all that knowledge in a human brain also “creates a bit of dissonance for her.”

Looking ahead, Gideon will play a big role in the show’s upcoming 100th episode (airing Wednesday, Oct. 27), in which she “becomes overwhelmed by her new human choices, sending her into a catatonic state,” per the official synopsis. When Astra and Spooner enter her mindscape, they discover that a virus is trying to destroying Gideon’s memories. In the process of trying to stop it, Astra and Spooner come across “deleted” scenes, so to speak, from past seasons, featuring several returning OG Legends: Wentworth Miller (as Leonard Snart/Captain Cold), Arthur Darvill (Rip Hunter), Victor Garber (Dr. Martin Stein/Firestorm), Franz Drameh (Jax/Firestorm), Brandon Routh (Ray Palmer/The Atom), Falk Hentschel (Carter Hall/Hawkman) and Courtney Ford (Nora Darhk).

“We’re showing the secret scenes that only Gideon the computer was there to see,” Klemmer previews. “It’s so fun to get to see the secret show that was taking place behind the show that aired six years ago.”

Legends fans, what did you think of the season opener? Grade it below, then hit the comments!