There are many moving pieces in Hulu’s new limited series Dopesick. What makes it a compelling watch is the way the drama focuses on the residents of a small and fictional Appalachian town ravaged by opioid addiction.

Key among them are Dr. Samuel Finnix (Michael Keaton) and his patient Betsy Mallum (Kaitlyn Dever), whom viewers got to know in Wednesday’s premiere. Finnix is a trusted figure in his community, but the well-intentioned widower is also overwhelmed by all of the pain and injuries the myriad of local coal miners need him to treat. By the first installment’s end, the list includes Betsy after her back is severely injured on the job. 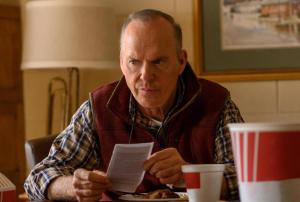 Finnix trusted the word of a Purdue Pharma rep, like numerous doctors mistakenly did in the early aughts, when he said that OxyContin was a miracle painkiller that hooked less than 1 percent of its users, and so he prescribed it to Betsy and her coworkers. We don’t see Betsy strung out on opioids in the first episode, but there is a flash-forward of another one of Finnix’s patients who turned to prostitution to finance her addiction.

Betsy, a closeted lesbian, dreamed of earning enough money to move away with her girlfriend and live in her truth far away from her homophobic parents. Since Dopesick is incredibly realistic and heartbreakingly sad, her dreams and her romantic relationship will likely be two of the various casualties her drug dependence will claim. Finnix is also shown in a flash-forward mourning the loss of his opioid-addicted patients while testifying in court, and he notes that so many died that he lost count. Will Betsy be one of them?

One of the most shocking revelations in Dopesick is that the FDA willfully ignored the potency of OxyContin and that the man who signed off on the deceptive labeling went on to work for the Sackler family. Smoking guns aside, the thing that will keep viewers coming back is the investment in characters like Finnix and Betsy.

What did you think of the first installment of Dopesick? Grade the premiere in our poll, and drop your thoughts in the comments.