This week on NBC’s La Brea, the survivors somehow read TVLine’s TV Questions column and realized they should get organized and, you know, forage for food. Meanwhile, Riley got to play doctor (no, not like that, Josh!) and the topside drone mission delivered a blast from Gavin’s past.

Josh is on the mend/his fever has subsided, but Sam is in rough shape after that tumble off a cliff. In fact, he cannot feel his legs, so he informs his daughter Riley (who was going to be pre-med but… isn’t) that she will need to put a needle into his spinal column and drain fluid/relieve pressure. Thing is, Sam will need a sedative, and since there is no liquor to be had, Scott suggests using some of the heroin that was found in the (Lucas’) car trunk. Riley balks, but Sam vouches for the approach… except, as feared, he got a bit too high during the procedure to complete a “Just be sure to….!” thought. Even so, with Josh cheering her on, Riley got it done, and Dad can even wiggle his toes. (For those with a La Brea/Lost BINGO card, you may now cover the Reversed Paralysis square.)

Meanwhile, Traffic Cop got smart and decided to round up and ration food, but just as a fight nearly broke out over (of all candy!!!!) a lousy Baby Ruth bar, a giant ground sloth showed up to scare everyone off, and then nosh on their entire stash. IDing the extinct creature, Scott shared with everyone his theory that they landed in the Los Angeles of 10,000 BC, which Eve backed up with her own sabre-toothed tiger encounter — but Marybeth’s son Lucas, for one, scoffed aloud and took off to locate a local and find their way home. A light bulb then went off over at least Eve’s head, and they realized that with their food gone, they’d have to hunt for their proverbial supper. Eve embarked with Ty and eventually nabbed a rabbit in a trap, only to have to set it free to distract a big bear. The bear, though, still chased after them, forcing them into a cave whose narrow entrance the bear caved in. 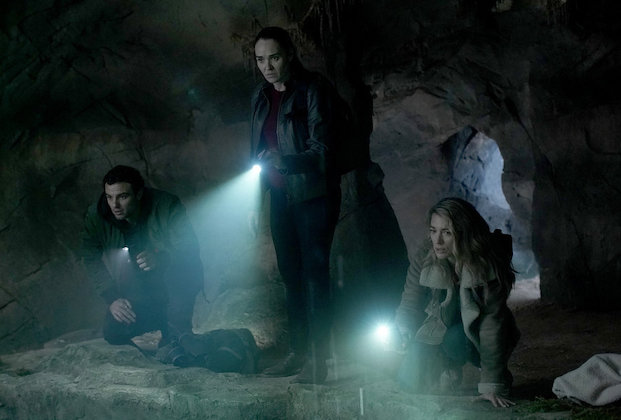 Inside the cave, Eve and Ty ran into Lucas and his mom (whose estrangement apparently revolves around her having to shoot his dad), and with the only known entrance covered, the foursome searched for another way out. Upon finding a small pool, Ty bravely dove in, then reported back that he found an exit. But guess what they all then found on the other side, after swimming through the pool (yet not ruining Eve’s shearling)? A skeleton wearing a Mojave U. (or something) sweatshirt, with the gun it apparently ended its miserable, stranded life with at its side! (For those with a La Brea/Lost BINGO card, you may now cover the Skeleton in a Cave square.)

Eve, Ty, Marybeth and Lucas made their way back to camp after gathering backpacks full of “Chicken of the Woods” mushrooms, but kept mum about the “person” they ran into along the way. 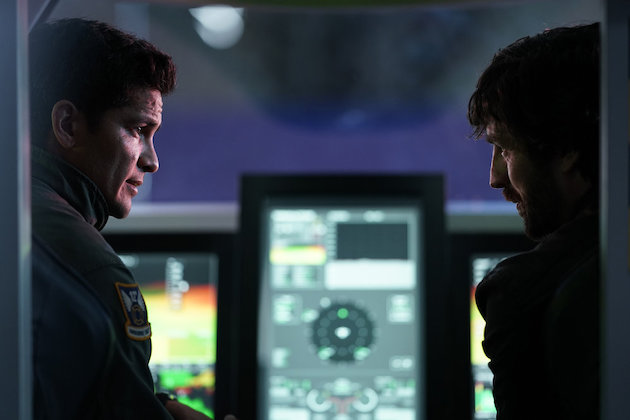 Dr. Nathan was rarin’ to get going with the manned drone thingy — all she needed was a top-notch, qualified pilot. Gavin offered his (sullied) services, but was shot down, so he reco’d an old friend/colleague, Levi Delgado (played by The Good Doctor‘s Nicholas Gonzalez). We then learned via flashbacks that Gavin and Levi had a bit of a falling out when last they saw each other, partly because Levi didn’t care for how Gavin’s visions were freaking out his family. But as we would later learn, from both Gavin/Levi and Eve down below, Levi and Eve had an affair years ago, during the time that Gavin’s visions and drinking pushed his family away. (As Eve shared with Ty, the car accident that lost Izzy a leg did not happen because Eve was busy at work, but because she was hooking up with Levi!)

All of which is a long way of saying that Levi probably wouldn’t mind some alone time with Eve — which is exactly what he’s about to get, now that his aircraft malfunctioned during the sinkhole descent and he parachuted out to safety in 10,000 BC. (For those with a La Brea/Lost BINGO card, you may now cover the Parachutist Found in a Tree square.)

What did you think of La Brea Episode 3, “The Hunt”?