ABC had some pixie dust to spare this week — and a hole to fill in its Tuesday-night schedule! — resulting in a double dose of Disney on Dancing With the Stars.

Whereas Monday’s broadcast featured the dances of Disney heroes (read recap), Tuesday’s episode was all about Disney villains. And in a truly wicked twist, Dancing ended the show with a double elimination, counteracting Monday’s joyous announcement that no one would be going home on Heroes Night. But hey, there was no Mickey Dance Challenge this time, so really, everyone wins.

Before we get to that double elimination, let’s break down Tuesday’s villainous performances:

Jimmie Allen and pro Emma Slater (Jazz inspired by Peter Pan): My adoration for Jimmie and his stunning versatility is well-documented at this point… but let’s not throw those nines around so casually, judges! Perhaps it was just Jimmie’s bulky Captain Hook costume — including a jacket that did him no favors, folding over on itself with every flourish — but this jazz was a little heavy, and the singer often looked more disinterested than intense. Judges’ Score: 35/40 (67/80 for both nights)

Cody Rigsby and pro Cheryl Burke (Viennese Waltz inspired by Beauty and the Beast, pictured): It’s unfortunate that Cody’s routines have had so many caveats thus far — “That was good, for being in quarantine!” “You did well, for only three days of rehearsal!” — because he does have a stronger command of choreography than a lot of his fellow contestants. (Both routines this week started with long solo sections for Cody. No easy feat!) Provided he and Cheryl stick around, let’s hope they stop getting scored on this strange curve… and maybe the judges can sprinkle in some substantial constructive criticism, instead of, “Some things to work on, but who cares tonight”? Judges’ Score: 31/40 (58/80 for both nights)

Mel C and pro Gleb Savchenko (Viennese Waltz inspired by Maleficent): After a slightly underwhelming jazz on Monday, Mel completely bounced back with this gorgeous Viennese waltz, which was so fluid, it practically looked like one long, continuous movement. If we could see her footwork underneath all that dry ice, I imagine it would have been exquisite. Judges’ Score: 35/40 (66/80 for both nights)

JoJo Siwa and pro Jenna Johnson (Paso Doble inspired by Descendants 2): Carrie Ann Inaba’s call for JoJo to be more elegant seemed a bit strange, when the paso doble requires the very electricity that JoJo delivered here. Plus, those synchronized leaps at the end of the number were *chef’s kiss* Judges’ Score: 35/40 (70/80 for both nights)

Kenya Moore and pro Brandon Armstrong (Viennese Waltz inspired by Snow White): I think Len Goodman summed it up nicely when he called Kenya’s performance, simply, “a lovely dance in 3/4 time.” It’s a shame that the Real Housewives personality seems to be getting lost in the shuffle, because she’s shown impressive growth and a real commitment to improving. Up against the evening’s other Viennese waltzes, though, this one was a smidge forgettable. Judges’ Score: 30/40 (59/80 for both nights)

Iman Shumpert and pro Daniella Karagach (Argentine Tango inspired by Aladdin): Thank goodness we have Len bringing a little restraint to these scores, because the nine paddles probably should have stayed stowed away on this one. Don’t get me wrong: Those wild lifts require real strength and control on Iman’s part, and he delivered. But we’ve already seen he’s capable of being more than just Daniella’s base for her astounding tricks, and he deserves the opportunity to showcase more challenging, legitimate content. Judges’ Score: 33/40 (63/80 for both nights)

Melora Hardin and pro Artem Chigvintsev (Jazz inspired by Tangled): Melora understands the assignment every. dang. time, and it’s a treat to watch someone who so completely and consistently embodies new characters. I do wish Artem had taken more choreographing risks, with a style as dynamic as jazz and a partner as adept as Melora. But what we got was so, so good. Judges’ Score: 37/40, including the season’s first 10! (73/80 for both nights) 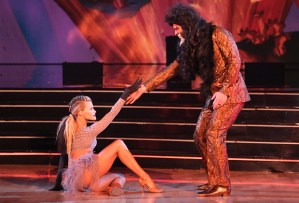 The Miz and pro Witney Carson (Argentine Tango inspired by The Lion King, pictured): This Argentine tango was a vast improvement over The Miz’s quickstep from Monday; even better, there was no blue body paint in sight! Even though this style is very much a showcase for the female dancer, The Miz did a solid job on the footwork front, and he brought the appropriate intensity to his performance. Judges’ Score: 34/40 (65/80 for both nights)

Brian Austin Green and pro Sharna Burgess (Paso Doble inspired by Pirates of the Caribbean): After five performance shows, Brian seems to be plateauing a bit, which is unfortunate on a season as stacked as this one. He did bring power and a bold energy to the ballroom, but his feet still looked timid and wobbly, particularly in those side-by-side sections next to Sharna. Judges’ Score: 27/40 (52/80 for both nights)

Matt James and pro Lindsay Arnold (Paso Doble inspired by The Jungle Book): It wasn’t a perfect paso doble, but Matt is finding his footing! Literally! Even more exciting, though, was Matt’s expressive face after taking up residence in Vacant Stare Land during previous routines. Judges’ Score: 31/40 (57/80 for both nights)

Olivia Jade and pro Val Chmerkovskiy (Jazz inspired by Coco): Man, this was an enchanting performance. The choreography underwhelmed a bit at the very end, when Olivia and Val seemed to waste several eight-counts lingering in that spotlight. But the majority of the performance was energetic and genuinely funny, with Olivia embracing the theatrics nicely. Judges’ Score: 35/40 (70/80 for both nights)

Suni Lee and pro Sasha Farber (Viennese Waltz inspired by Hocus Pocus): It was such a delight to see Suni finally elongating her movements, when she’s suffered from a case of spaghetti arms in past weeks. Her face could still stand to be a tad more animated — give us those wild Melora Hardin eyes, girl! — but the lines and extensions here were just lovely. Judges’ Score: 35/40 (68/80 for both nights)

Amanda Kloots and pro Alan Bersten (Paso Doble inspired by Cruella): Let’s address the most pressing topic first: Who did Alan wrong in the hair and makeup department? First, that Tarzan wig, now, these eyebrows! A costumer has got to be sabotaging him, no? But I digress. Since Amanda’s performance on Monday was unusually reserved at times, I was relieved to see her go full de Vil here, bringing a ferocity to her execution without sacrificing proper form. Judges’ Score: 36/40 (68/80 for both nights)

Your turn! Are you bummed to see Brian and Matt leave the ballroom? Hit the comments!