Dancing With the Stars would like us to come along and sing the song and join the jamboree… not once, but twice this week.

You guessed it: Disney Week has taken over the ABC competition series once more, with Monday’s episode celebrating Disney heroes, while Tuesday’s special installment will feature dances inspired by Disney villains. And in true fairytale fashion, Monday’s broadcast delivered a happily-ever-after moment when no couples were eliminated from Season 30.

Still, the remaining 13 couples were tasked with learning two performances this week, and all of Monday’s routines had to incorporate the Mickey Dance Challenge, a short piece of choreography — courtesy of Mickey Mouse himself — that had to pop up somewhere in each couple’s performance, regardless of their assigned style. At the end of the show, the judges doled out two bonus points to the duo that best executed Mickey’s challenge.

Let’s break down the evening’s routines:

JoJo Siwa and pro Jenna Johnson (Viennese Waltz to Cinderella‘s “A Dream Is a Wish Your Heart Makes”): Real talk: About halfway through this performance, I noticed I had stopped typing in favor of beaming at the scree, full Dopey-in-Snow-White style. Even when male contestants have attempted this style on the show, their footwork can look sloppy and haphazard as they twirl their female partners around, but JoJo was beautifully grounded and sure of herself throughout the number. Plus, she and Jenna had an easy, relaxed chemistry, without losing any of the classic Cinderella romance. Judges’ Score: 35/40 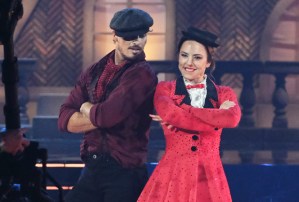 Mel C and pro Gleb Savchenko (Jazz to Mary Poppins‘ “Step in Time,” pictured): Perhaps it was because Mel and Gleb’s routine kicked off with the high-stakes Mickey Dance Challenge — who knew Mickey Mouse could be such a source of stress? — but Mel seemed more in her head during this jazz than she’s been in any other performance, visibly anticipating (and perhaps worrying about) the next combination. That said, the number was dizzyingly fast and stuffed with content, and not many contestants could have handled that as skillfully as Mel did. Judges’ Score: 31/40

Matt James and pro Lindsay Arnold (Quickstep to The Incredibles‘ “The Incredits,” pictured): Man, the costume department did Matt dirty on this one, huh? If the quickstep weren’t already tough enough — especially for a contestant whose ballroom technique leaves something to be desired — now he has to contend with Frozone’s full helmet and visor? Give the man a chance, at least! Judges’ Score: 26/40

Jimmie Allen and pro Emma Slater (Paso Doble to Mulan‘s “I’ll Make a Man Out of You”): Jimmie’s adaptability from style to style is, for me at least, the season’s most pleasant surprise thus far: Just last week, the country singer turned in a sassy salsa, but he seemed to effortlessly pivot to the strength and fire of the paso doble this time, totally committing to the style’s powerful movements without getting herky-jerky about it. The lip-syncing, on the other hand, has gotta go. Judges’ Score: 30/40

Amanda Kloots and pro Alan Bersten (Rumba to Tarzan‘s “You’ll Be in My Heart”): The hip isolations! The hip isolations! Though Amanda did seem strangely reserved at various points of this rumba, her technique was sensational, with each movement flowing gorgeously into the next. I am starting to resent this Mickey Dance Challenge for eating up time spent in the contestants’ actual style, but Amanda and Alan did a decent job working that combo into the rumba, where it definitely didn’t belong. Judges’ Score: 32/40

Olivia Jade and pro Val Chmerkovskiy (Samba to The Lion King‘s “I Just Can’t Wait to Be King”): Ah, a Lion King-themed number without a single velvet onesie or prosthetic nose in sight. Blessings. But even on its own, this samba was energetic and entertaining, though Olivia’s confidence seemed to shake a bit when she and Val hit that remix in the middle. Also? Derek’s been sitting next to Bruno way too long. That comment about Olivia’s “adorable” lion makeup gave me all the heebie-jeebies. Judges’ Score: 35/40 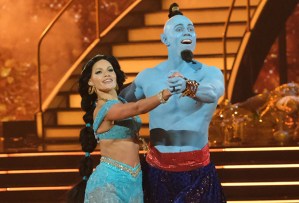 The Miz and pro Witney Carson (Quickstep to Aladdin‘s “Friend Like Me,” pictured): Hmm, I see we’re approaching the “We love your energy, so here’s an eight!” part of the season with The Miz. There’s no denying his personality is infectious, but the quickstep footwork here was messy, and their Mickey Dance Challenge fell noticeably out of sync toward the end. Plus, if there’s any routine where The Miz shouldn’t hold back his energy, it’s when he’s dancing to “Friend Like Me” as Aladdin‘s Genie. The guy is painted blue! We’re way past reining it in! Judges’ Score: 31/40

Kenya Moore and pro Brandon Armstrong (Contemporary to Moana‘s “How Far I’ll Go”): I would have loved to see Kenya completely give herself over to the dance a little more, especially when the contemporary style allows for that openness. On the other hand, contemporary can be daunting with its comparatively abstract movements, and Kenya did a nice job grasping the choreography overall. Judges’ Score: 29/40

Brian Austin Green and pro Sharna Burgess (Waltz to Snow White‘s “Someday My Prince Will Come”): Brian and Sharna’s obvious love for each other usually turns me into a human heart-eyes emoji… but it is becoming a weird obstacle for them, eh? The chemistry is unmatched, but the content is weirdly lacking every week, and all of Brian and Sharna’s performances thus far are starting to blend together in a blur of cutesy affection. Judges’ Score: 25/40

Suni Lee and pro Sasha Farber (Salsa to Encanto‘s “Colombia, Mi Encanto”): Suni’s facial expressions were a bit more varied here, which was excellent to see. But here’s hoping Sasha continues to work with her on each style’s correct technique instead of relying on those gymnastics tricks so much; in that final side-by-side section, Suni’s elbows were pinned so closely to her sides, and I hope she gets the chance to work out those small kinks to perfection. Judges’ Score: 33/40

Melora Hardin and pro Artem Chigvintsev (Quickstep to The Jungle Book‘s “I Wan’na Be Like You”): Melora Hardin is not here to get lost in the shuffle, folks! Even when she’s tasked with portraying a cartoon bear, the Office actress brings such likability to every performance: It’s almost like she can’t quite believe she’s dancing so brilliantly, but her movements still possess confidence and certainty. Judges’ Score: 36/40 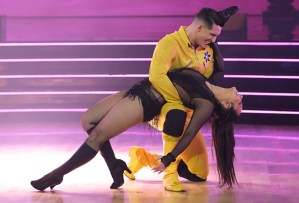 Cody Rigsby and pro Cheryl Burke (Jive to A Goofy Movie‘s “Stand Out,” pictured): It speaks to Cody’s proficiency with choreography that he could handle that entire opening section by himself without appearing shaky or nervous. What’s a little more puzzling are his continuous struggles staying in sync with Cheryl, which were a bit more glaring with those lightning-fast jive steps. (A six, though, Len? A six? C’mon.) Judges’ Score: 27/40

Iman Shumpert and pro Daniella Karagach (Foxtrot to Frozen‘s “Let It Go”): Those low-ish scores for Cody and Cheryl are extra-confusing after taking in Iman and Daniella’s foxtrot, which yielded three eights (?!) despite an altogether so-so showing from Iman. I appreciate the tenderness he brought to this style, but his face lacked any real expression until the Mickey Dance Challenge hit, and I thought some Road Runner dust clouds might form around his feet on those final spins. Judges’ Score: 30/40

Before the contestants received the good news that no one would get booted on Monday, the judges awarded Jimmie and Emma those coveted two bonus points from the Mickey Dance Challenge, raising their total score for the night from 30 to 32 out of 40.

OK, your turn! How did you feel about those Disney Heroes performances, and who ought to be eliminated on Tuesday night? Tell us in a comment below!