Oh, Nathan… who hurt you?

If Ted Lasso‘s Season 2 finale is to be believed, the damage was largely done (albeit unintentionally) by Jason Sudeikis’ friendlier-than-thou Midwesterner, who saw Nate’s potential and elevated him from kit man to assistant coach in Season 1. But Ted was distracted by his own demons this year — so much so that he didn’t necessarily notice Nate’s transformation until it was complete. And in Friday’s season ender, Nate lashed out at Ted for no longer making him feel like he mattered. Later, in a bout of frustration, Nate tore Ted’s “Believe” sign in two, then walked out of Nelson Road and took a new job as head coach of Rupert’s West Ham United. (For a full recap, click here.)

Below, the Emmy-nominated Nick Mohammed talks to TVLine about Nate’s total-180, revealing just how far back he knew about Season 2’s many twists and turns. He also pontificates on whether Nate is deserving of a redemption arc upon the series’ return (presumably in 2022).

TVLINE | Before we dive too deep, I wanted to ask about something that is very much on the surface: Nate’s hair. Was that cosmetic alteration always intended to be part of Nate’s larger transformation in Season 2?
Absolutely… We discussed it quite early on. I’ve got flecks of grey hair on my temples, but they actually painted those black in Season 1 to give Nate a slightly more youthful quality. But we really liked the idea, and I remember chatting to Jason [Sudeikis] about it, and then to our makeup designer Nicky Austin, about how cool it would be to track Nate’s descent — the stress, the guilt, the anxiety, the shame… You hear often about all of that affecting someone’s physical appearance, and we liked the idea of using that to track his transformation. So yes, it was absolutely in it from the start. You can really start noticing it from Episode 5 onwards, as we were painting in gray hairs. It was a continuity nightmare, but it was worth it, and something that people have only just started to catch onto in the latter end of the season. 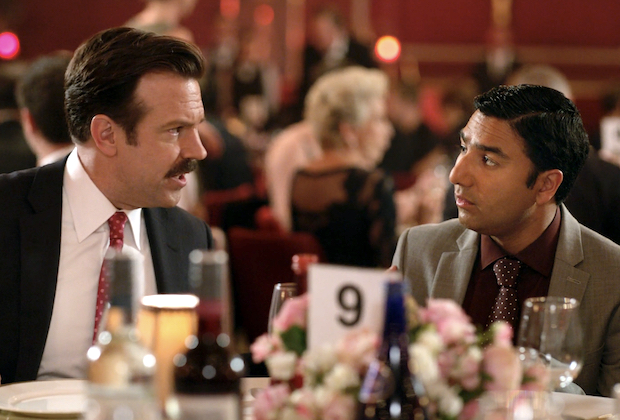 TVLINE | So you’ve known about Nate’s journey to the dark side since Season 1?
Right from the off, really. I remember, distinctly, a scene we were filming at the gala in Season 1, which I think was in Episode 4. I sat next to Jason for a lot of that filming, and when they were moving cameras around, we were chatting and he outlined that whole three-season arc for Nate. I think at that point, we didn’t even know that Seasons 2 and 3 had been commissioned, but he had it all in his head, including the Empire Strikes Back tones to this season and to Nate’s journey.

TVLINE | How has it been for you, first as a performer grappling with Nate’s transformation, then later seeing it received so negatively on social media?
During filming, I trust the writers implicitly. And I was so excited about the prospect of going on a slightly different journey with Nate. But it was a tricky thing… I knew it would be challenging to film, because my comfort area is doing lighthearted, silly comedy. In Season 1, Nate’s journey was that underdog journey that the audience could really get on board with, and it felt fulfilling. I got to have fun being the awkward guy. Certainly in Season 2, they dug a little deeper with Nate and uncovered a few demons — but to be fair, those were always there in Season 1, we just laid them bare in Season 2. Particularly with some of the later scenes, like when Nate lays into Ted, and kisses Keeley, and when he was rude to Will and Colin, that stuff was challenging in some respects because it’s not nice what he’s doing. Obviously, I don’t condone his behavior by any means, and also, it was just a different dynamic to what I’d had in Season 1. But we spent time on it, and we chatted as we filmed over the course of six months. My concern was not wanting the character to peak too early — that there was somewhere for the character to go in terms of him going on a power trip. It was about drip-feeding those negative qualities that really come to bear in the latter half of the season.

And then in terms of the Twitter reaction, we all anticipated it. I think it’s fair to say people enjoyed Nate’s Season 1 journey, and we knew as soon as Season 2 started to air that they’d have a very different flavor this time around, and see a different side to Nate. But it’s fiction, and I quite like the fact that the audience hated Nate. They shouldn’t be digging his behavior. They should be absolutely mortified by it. [Laughs]

TVLINE | I have to admit, I’m not sure I could pinpoint the precise moment Nate started to feel like Ted was ignoring him, or no longer treated Nate like he was important. I didn’t quite understand where Nate’s anger was coming from…
I don’t think it’s that Nate is not “important” to Ted anymore, it’s that Ted has had a lot of other things going on, right? And Nate is sort of putting two and two together and making five. He’s not quite tracking that he’s not the only person with a story. There are a few key moments — and first off, it’s crucial, and really amazing, actually, that the only scene between Ted and Nate in Season 2 is that one, in Episode 12. In fact, the previous scene between just Ted and Nate is in Season 1, Episode 7, where Ted apologizes to Nate for snapping at him, and that’s really important. We talked about that a lot, to try and sell a sense of abandonment. 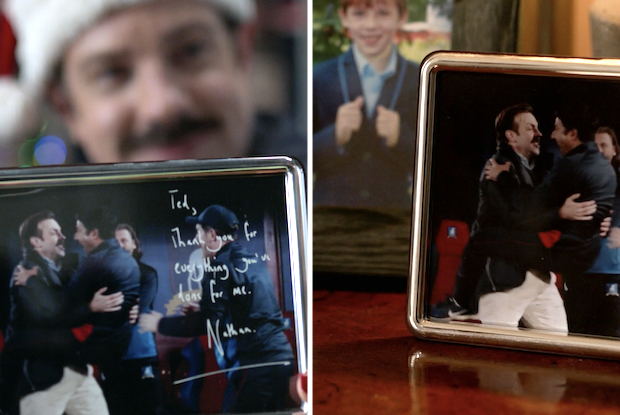 But there’s also lots of little hints along the way. I think the key one is just before Roy is brought in as a coach in Episode 5, and they’re talking about needing a “big dog” to go and talk to team captain Isaac. Nate says, “Oh, I’ll do it,” and Ted literally laughs in his face. I think he says, “Oh, you’re not joking. I thought you were joking,” and Nate walks out of the room. Even when he gives the Christmas present to Ted in Episode 4, he maybe expects a bigger thing to be made out of that. And in Episode 7, when Beard first admonishes Nate for having a go at Colin, the first thing that Nate says to Beard is, “Did you tell Ted? Did you tell Ted?” Nate is thinking about Ted, and missing Ted, and in need of this guiding light/father figure that he’s never really had, more than ever. And Ted has his own demons to deal with. And not to condone Nate’s behavior, but there are a lot of micro-aggressions against Nate — even him not getting a Nespresso machine in Episode 5. It’s played as a joke, but it’s the kind of thing that will eat at Nate inside.

TVLINE | It was heartbreaking when Nate mentioned Ted not hanging that photo of the two of them up in his office, because we saw in Episode 10 that it meant so much to Ted that he brought it home with him, and it sits on his bedroom dresser.
Yes! Right next to the photo of Ted’s son! We see it right before Ted has his panic attack. It’s heartbreaking, and that was [executive producer] Bill Lawrence’s idea. He told me about that, I think as we were marketing Season 1. That was an emotional beat that they had in their heads, even before they had written stuff for Season 2… It absolutely broke my heart.

TVLINE | I also found it alarming that Nate seemed upset that he didn’t get a bigger reaction out of Roy when he ‘fessed up to kissing Keeley. It was almost like he was craving that visceral reaction — either for Roy to beat him to a pulp, or to berate him in front of the Diamond Dogs — and he didn’t get it. Where do you think that stems from? It is years of bullying? Or maybe his relationship with his father?
I think a lot of Nate’s insecurities stem from his toxic relationship with his dad. That’s examined a little bit in Episodes 5 and 7, and we can read into that. He’s absolutely betrayed Roy, and he’s been deeply inappropriate with Keeley, who was just being so kind and standing by him, and he completely misinterpreted all of that. Brett [Goldstein] was telling me they were trying to think of what would be worse for Nate. “Would it be worse if Roy sized up against him, and maybe they had a fight?” But what’s actually more painful for Nate is that Roy brushes it off because Nate is almost… not important enough to pose a real threat. I think that is deeply painful for Nate, that he feels like he isn’t one of the big boys, or that he’s just not getting the respect or the attention that he deserves. 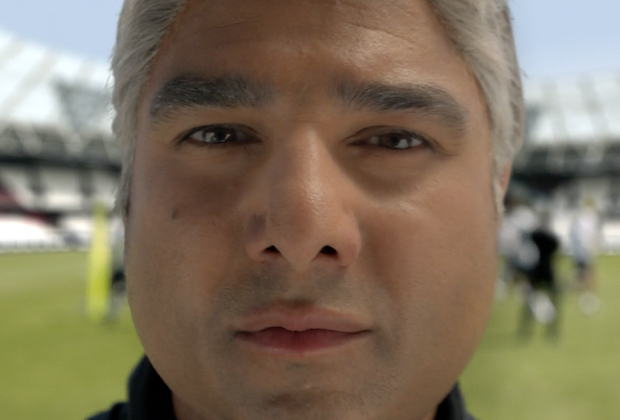 TVLINE | Nate is looking mighty pleased with himself in that flash forward, as West Ham’s new head coach…
It’s quite smug, isn’t it? That’s a really fun, tantalizing way to end.

TVLINE | Do you think there’s even any part of him in that moment that is aware of all the damage he’s done to get there? Or has his ego grown too big for him to take notice?
As much as he’s on a big power trip, and he’s now with another team, and a really good team, I think he hates himself. All the spitting on the mirror, that’s just him pitying himself. When he looks in the mirror after the Keeley move, he hates what he has done. He hates himself and he’s full of s–t.

TVLINE | So the spitting — which I was going to ask about — that’s always been about self-loathing?
That’s exactly what I think, and that’s how I want it to play. Whether that means he can ever be redeemed — because I think what people would like is a redemption arc in Season 3 — I genuinely don’t know, because they’re still in the writers’ room. But also there’s a very good chance that Nate has gone too far over the mark and can’t come back from this. And he may be the one character that doesn’t get a redemption arc in Ted Lasso. You never know what they might do.