Crafting a satisfying ending that both feels complete and looks to the future is no easy task — just ask Game of Thrones fans — but On My Block managed to do so with ease. The Netflix drama wrapped its final episode with the promise of a new adventure as our Core Four discover a mysterious map leading to an unnamed treasure.

It’s a full-circle moment that also seems to address one final question: Whatever happened to the Rollerworld money? The show didn’t provide a definitive answer, but the last of a series of flashbacks showed that Oscar was the last person in possession of it. Since he denied using any of it to fund his restaurant in Portland, one can assume he likely gave it to Abuelita, who had asked what he planned to do with it.

Series co-creator Eddie Gonzalez confirms that the mysterious treasure is the group’s missing Rollerworld money. “We’ll say it is because it was left to them by Abuelita,” Gonzalez tells TVLine. “It’s a beautiful cliffhanger, and it seems only fitting that Abuelita would leave them with something like that.” 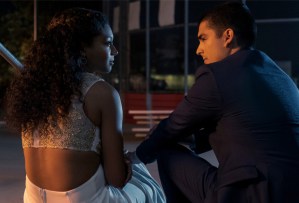 With most of the big mysteries solved, the Core Four can focus on looking ahead. Jamal is going to work with tech billionaire Noel Aroma, Ruby and Jason are set to attend different colleges, Monse is taking a year off to write about her crazy life and Cesar is headed to Portland to help raise his niece following Oscar’s tragic death. Though they’re looking down different paths, the final image from the series is of the group standing together.

“Think about your friends in high school. Things don’t always work out, but at the end of the day, you know you have your crew,” Gonzalez adds. “We wanted to make it as realistic as possible, and we have those moments when they’re together but there’s also some uncertainty about the future. Monse and Cesar directly speak to that. There is uncertainty to it, and that definitely was our intention.”

Throughout the series, Monse and Cesar fought over Cesar’s involvement with the Santos. Haft says there is room for the pair to rekindle things now that he’s free of the violent gang, but also notes that Cesar’s priorities have shifted.

“There is a world where they can find themselves back with each other. I think, though, that Caesar has matured to a point where his priority now will be getting his life on ‘the right track’ and looking out for his niece and his sister-in-law and being a part of their life. Cesar has matured a lot, much like how Oscar wanted him to see that the gang wasn’t the perfect future for him, and to grow into what he had wanted to be before the gang. I think that’s really his primary journey, is to be the man he wants to be. The relationship with Monse is secondary, but absolutely possible, but I think he’s got a lot to do first.” 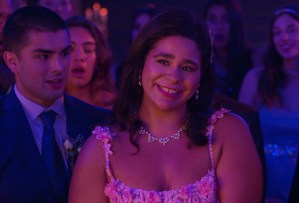 Things are also looking up for Jasmine, who finally learned to focus on herself rather than pouring all her energy into her relationship with Ruby. Though their pantry meet-up in the finale suggests the pair isn’t done completely, Jasmine has plenty to accomplish, with or without Ruby.

“There’s a world where they can get back together, but quite honestly, there’s also a world where she goes off and she meets someone else and she grows into something completely different,” Gonzalez says. “I also see her being the mayor of Freeridge because she has such a big and beautiful persona that, honestly, I don’t think there’s anything she cannot do. If there was a sequel 10 years down the line, and you said to me that Jasmine is basically running, that she is a mayor there, I wouldn’t blink twice. I could see her doing it.”

On My Block may be ending, but we haven’t seen the last of Freeridge. The finale hinted at a new Core Four when Ruby gives an approving nod to a new quartet peeking over the fence at the OG crew’s gathering celebrating Abuelita. Netflix has already greenlit a spinoff titled Freeridge — check out a first look here — confirming that there’s plenty more story ahead.

“The world of Freeridge is very rich and vibrant, and there are tons of stories to tell. We’ve always had a tiny grain of hope — [co-creator] Lauren Iungerich, [executive producer] Jamie Dooner, Eddie [Gonzalez] and myself — always had a hope that we’d continue the stories of Freeridge,” Haft concludes. “Luckily, and with great gratitude, we say thank you to Netflix for allowing us to continue telling those stories. More to come.”