Well, the Riverdale writers decided to pick up the show and shake it like a snow globe in Wednesday’s Season 5 finale, with all kinds of new couples being revealed. Who ended up together? And who might not survive to see Season 6?

The gang is contemplating new beginnings: Veronica is moving back to New York after breaking up with Archie, Betty is reopening the town’s FBI office after graduating… and Jughead has his arm around Tabitha at Betty’s graduation party. He and Tabitha go on their first official date and even talk about moving in together, but they’re interrupted by a panicked phone call from Pop’s. They rush over to find the diner ablaze, and when Archie and his fellow firefighters try to help, they discover their fire truck’s tires have been slashed. After the fire is finally put out, they all walk through Pop’s to survey the damage, and Sheriff Keller says a Ghoulie threw the molotov cocktail that started it — a Ghoulie sent by Hiram, Veronica would bet. 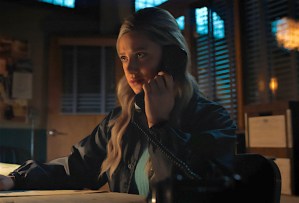 Betty arrests Hiram, but she doesn’t have much to hold him on, so she turns to Veronica for evidence of his financial crimes. Ronnie digs up documents that show Hiram is aiming to absorb Riverdale into his SoDale land development. To stop him, Archie needs signatures to reincorporate the town, and he recruits the Serpents to round them up. But Veronica thinks they may need to use more drastic measures: They hatch a plot to kill Hiram (!) and make it look like a prison escape. Plus, Betty gets a congratulatory call from… the Trash Bag Killer. (Ugh, him again?)

Archie and Veronica haul Hiram out of his jail cell at gunpoint and take him out to the woods, with his daughter ordering him to leave town after showing him surveillance footage (provided by Reggie) of Hiram smothering that old mobster who killed his dad. Hiram reluctantly walks off — and are we really done with Hiram Lodge for good?!? (Apparently, we are!) The town needs a new system of government if they’re going to reincorporate… but Cheryl Blossom has something to say about that. 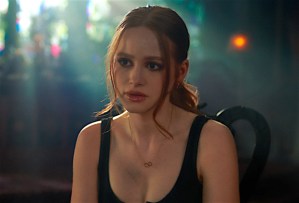 Cheryl and her pet project Britta are toiling away digging for palladium, and they find human remains down there. Nana Rose isn’t surprised: She tells Cheryl about her ancestor Abigail, who was burned at the stake by angry townsfolk… who were the ancestors of Archie, Betty and Jughead! Abigail cursed them all, and they later died in a mine collapse. Cheryl barges into Archie’s and demands retribution from her former friends, along with an apology. But they’re busy trying to save the town, and they blow her off. At a town meeting, Archie gives a stirring speech nominating Tabitha, Toni, Alice and Frank as the city’s new council… but Cheryl cuts him off, declaring that Thorn Hill is seceding from Riverdale and governing itself.

Archie’s proposal goes through, but Cheryl’s not giving up. Back at Thorn Hill, he reads aloud from her ancestor Abigail’s dying curse (“I will bathe in the blood of your sons and daughters”), and suddenly, a stiff wind blows through the creaky old house and all through town. Uh-oh… did Cheryl just tap into some spooky supernatural spirits? (She’ll be getting some help with that.) But back to those new couples: Archie and Betty share a laugh and a beer after the town meeting, and he confesses he wants to give their romance another shot. “I want to be with you, too, Arch,” she admits, and they share a steamy kiss that leads to the bedroom. But they’re interrupted by a ticking underneath Archie’s bed. They look and find a bomb ticking down to zero! “Tick, tick, boom,” a triumphant Hiram says as he drives off.

In other finale news: Veronica decided to stay in Riverdale and open a casino with Reggie — and they locked lips, too; Kevin announced he’s moving to New York to pursue his Broadway dreams; Jughead started up a new alternative newspaper with the help of his high school students; Pop volunteered to help Tabitha reopen Pop’s; and Alice even struck up a new romance with Frank. (We approve!)

And remember, we won’t have to wait long to find out what happens next: Riverdale returns next month, with Season 6 premiering with a special five-episode event on Tuesday (a new night!), Nov. 16 at 9/8c (a new time!) on The CW.

Give the Riverdale finale a grade in our poll, and then grab a booth in the comments to share your thoughts.